Editorial: The weight of a win 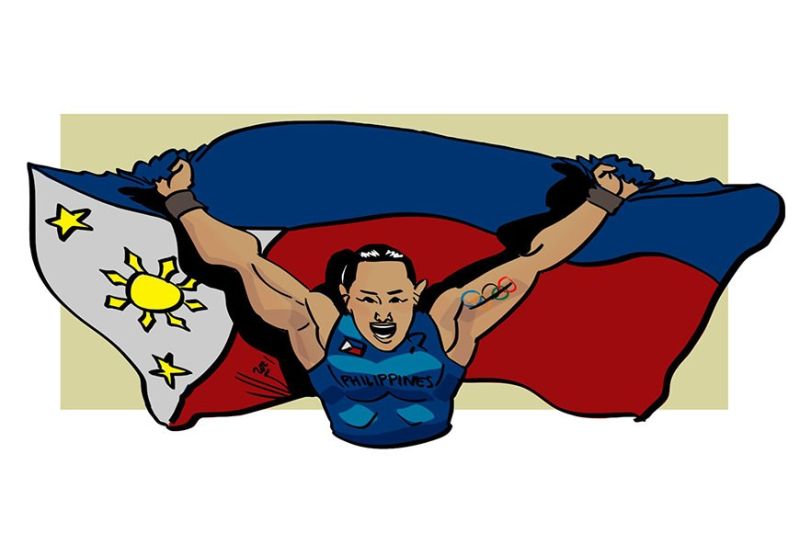 The thing about weight lifting, undoubtedly one of the most iconic Olympic events, is that it caps into a singularly mad moment an outburst of strength and power. Not quite the charm and grace you see in a dash, a spin, a vault, a lunge—just the quiet, steady explosion of energy, where grip defies tonnage.

So we have our very own Hidilyn Diaz, up against the weight of so many things, literal and metaphorical. In an event traditionally dominated by Chinese lifters, Diaz had to max out not only her own 255-kgs. train load, but the precedent lift of Chinese competitor and record holder Quiyun Liao, who raised aloft 256 kgs. with nary a grimace. Our bet, ushered into the floor with the lightness of a largely Pinoy smile, placed two more kilograms into her load. All of her solid four-feet-eleven-inch frame—ankle, knee, hip, arms—heaved all it could muster to send the 257-kilogram steel up into the sky. One, two, almost like a cue to the first heartbeat to Lupang Hinirang. That was how she got the gold for us after nearly a century of medal drought—but that’s a poor way to tell the story.

This was her fourth Olympics. The Philippine Sports Commission had asked the Zamboanga native not to retire before the Tokyo Olympics. By then, she already had silver medal from the 2016 Rio Olympics. In the Asia championship, she only finished fourth, although Monico Puentevella, who was head of the national weight lifting federation and the Philippine Olympic Committee president, said it was a supposed ploy to impress upon the Chinese that Diaz had peaked. It seemed to have worked in Tokyo as the Chinese lifters settled for 255 kgs. in the final attempt. Diaz, with ice water in her veins, held steady the weight that was to hoist her into the sports’ lore with record lift. The Filipinos couldn’t be prouder.

Diaz’s strength is an assembly of years spent under the weight of adversities and challenges. She is daughter to a tricycle driver in Zamboanga City. In 2012, shortly before Rio, she sustained an injury that drained her spirit. “It was survival,” she said. “I’m the breadwinner in my family.” Not to skip recall, too, was the 2019 Palace matrix that tagged her as one of the “Oust Duterte” plotters.

But just what exactly can life throw to weigh down a lifter? Not even the lack of support from the supposedly mandated insitutions could stall her journey; she had to mobilize the help of private sector donors. For years, she had trained in a community gym that was built by piecemeal with the support of corporate sponsors. It also helped raise funds for more competitions in the long haul.

The pandemic caught her training under country lockdown in Malaysia. She trained under top Chinese coach Gao Kaiwen a bit earlier before her first Asian Games gold in Jakarta 2018.

Her Tokyo win thrust into the limelight stories of how she had gone around communities in Mindanao training lumad kids the sport of weight lifting. Diaz will certainly have more lights panned on her after this win.

She has the law-mandated P10 million reward in the bag when she gets home. Business tycoons Manny Pangilinan of PLDT and Ramon Ang of San Miguel Corp. shell out P10 million each for Diaz. Deputy House Speaker Mikey Romero has P3 million ready for her, and a Zamboanga City local government ordinance allocates P2.5 million in reward. Seize the weight of a windfall—P35 million in cash, on top of a Tagaytay house and lot from Philippine Olympic Committee president Abrahan Tolentino and a P14 million Megawide condominium in Eastwood City.

But immediately after dropping the 257 kgs. miracle, Hidilyn stepped into the podium to receive her medal, bowing to everyone while tears welled up non-stop as her national anthem played on. That was, apparently, the best reward for her—lifting her countrymen’s spirits up, the weight of which she had never imagined.