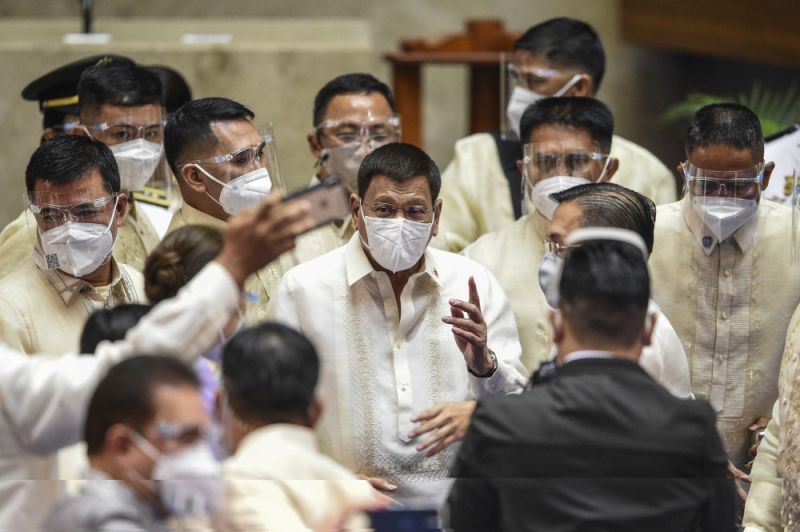 MANILA. President Rodrigo Duterte is surrounded by security after he delivered his final State of the Nation Address at the House of Representatives in Quezon City on Monday, July 26, 2021. (AP)

FOR local labor group General Alliance of Workers Associations (Gawa), the State of the Nation Address (Sona) of President Rodrigo Duterte was a well-crafted exaggeration of achievements from the perspective of his administration.

Its secretary general Wennie Sancho said it was a panoramic presentation of economic prosperity in order to eclipse the economic sufferings of the poor toiling masses under the heavy weight of pandemic and an ailing economy.

At the same time, Sancho said it was also an admission of a failure in leadership as the President admitted that he was fighting a losing battle in his war on drugs.

“He [Duterte] also categorically stated that nobody can stop corruption unless the government is overthrown completely,” he added.

The President delivered his sixth and final Sona at the Batasang Pambansa Complex in Quezon City on Monday, July 26.

From the point of view of the local labor sector, there were no concrete measures presented to address the problem of massive unemployment and the rising numbers of Filipino families experiencing moderate and extreme hunger.

“Instead, we were left with empty assurances that our economy is on the road to recovery,” Gawa said.

The group said the often-repeated pronouncements by the government are meant to boost the momentum of the Sona.

From a layman's point of view, the Sona of Duterte was in a way, a double-talk, mixed with languages that appear to be earnest and meaningful, but in fact a mixture of sense and non-sense, it added.

Sancho said some observers alleged that the Sona was neither here nor there.

The President, he said, ordered the return of garbage in Canada because we are not a dumping ground for garbage, but the allegations that the Chinese ships are dumping human waste into the West Philippine Sea is still undergoing investigation until now.

Sancho said the President proudly talked about the return of the Balangiba bells that symbolizes freedom but he never demanded from China to return to us our territories which they had illegally occupied.

Duterte had declared to all that the Arbitral Ruling in the West Philippine Sea forms part of the International Law and must be respected, he said.

On the other hand, he was also saying that it was a mere scrap of paper because it was not recognized by China, the labor group also said.

"For all his bravado he said that it would be a massacre for us to go to war with China because we are not a competent enemy of China," he said, adding that in addition, he said that China was the first country to help at the start of the pandemic.

"It is as if we owe a big favor to China that in return we should give up our territorial claims in the West Philippine Sea. It is short of saying, it is an exercise in futility," Sancho said.

He asked "shall we surrender our sovereign rights out of fear? Shall we maintain our "kowtow" policy towards China?"

Sancho, who is also the labor representative of the Regional Tripartite and Productivity Board (RTWPB) in Western Visayas, said there was no mention of the Security of Tenure Bill which the President vetoed in 2019 and his unfulfilled campaign promise to end "endo" or contractualization.

This, he said, would further fan the flame of discontent in the labor sector in the midst of economic crisis.

For Gawa, the Sona failed to focus on the major economic concerns compounded by coronavirus disease (Covid-19).

The President could have done more to alleviate the economic sufferings of the people, by the Sona is an "orchestrated scenario to make it appear that all is well," its official said.