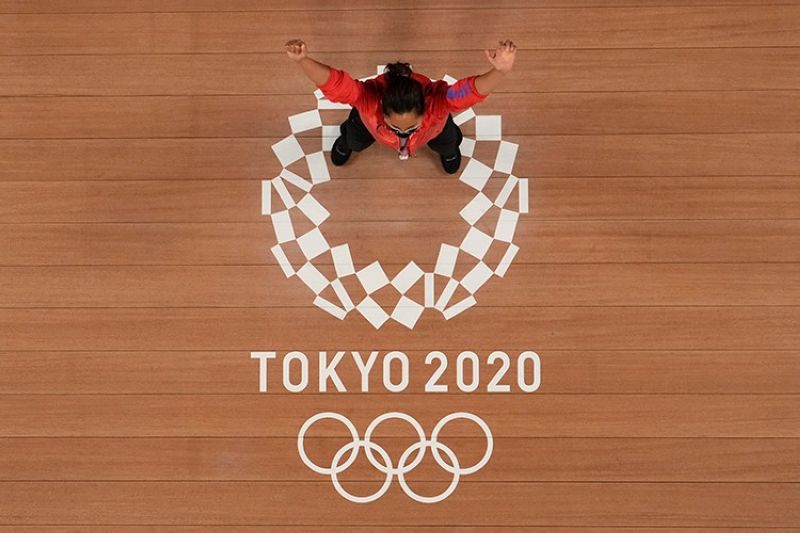 JAPAN. Hidilyn Diaz of Philippines does rehearsals without barbell on the stage prior to compete in the women's 55kg weightlifting event, at the 2020 Summer Olympics, Monday, July 26, 2021, in Tokyo, Japan. (AP)

The 30-year-old Olympic veteran sent the Philippine flag waving and the national anthem played for the first time after she conquered the women's 55kg of weightlifting when she lifted an Olympic record of 224 kilograms last night.

Diaz also wound up the Philippines' 20-year Olympic medal drought when she won the silver medal in the Rio Olympics in 2016.

On Sunday, July 25, Samahang Weightlifting ng Pilipinas president Monico Puentevella has assured that his team will deliver one more medal for the country in the Tokyo Olympics.

Puentevella's prediction that Diaz will be one of the Filipino athletes to deliver the Olympic medal for the country came true. And, Diaz became the most-bemedalled Olympian in Philippine history by representing the Philippines fourth time.

The SWP chief also stressed that if his team gets luckier, they may be able to have 2 Olympic medals with 22-year-old Cebuana Elreen Ando also lifting weights for the Philippines in Tokyo.

As of Tuesday, July 27, Puentevella is yet to give his comment after his team made history in Philippine sports.