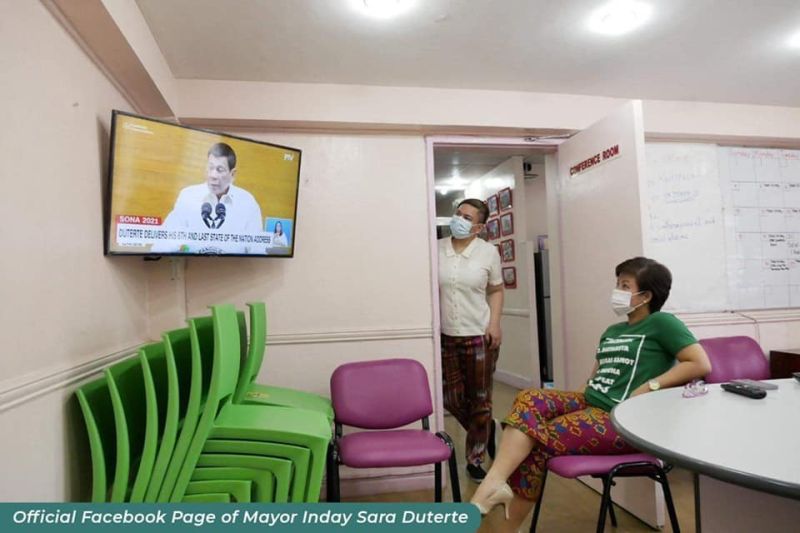 DAVAO City Mayor Sara Duterte-Carpio supported her father's statement of putting Davao City in the least priority when it comes to infrastructure projects.

Duterte-Carpio shared photos in her Facebook post on Tuesday, July 27, watching her father delivering his last State of the Nation Address (Sona) on July 26 from Davao City Hall.

In her post, she said one of the things she remembered was when the President said that he will prioritize the entire country, and that Davao City will be least prioritized.

"With all due respect sa mga Dabawenyos, sang-ayon ako doon, para mas lalong mabigyan ang wala pa, at matutukan ang prayoridad ng mas nangangailangan (to Dabawenyos, I agree with that to give more to areas which still don’t have and focus more on the priorities of those which needed [projects])," Duterte-Carpio said.

Duterte said the city will be the least priority in the big-ticket projects in infrastructure and transport modernization in the country.

Duterte, a Davao City mayor for 20 years before he rose to presidency in 2016, told Dabawenyos to understand his decision.

He said, however, that the Davao City Coastal Road Project will be completed by 2023.

Duterte-Carpio already said she and her mother Elizabeth Zimmerman will not attend the Sona. She did not give any reason behind her decision to miss the event.

Davao City Vice Mayor Sebastian "Baste" Duterte did not attend the Sona as he is still recovering from Covid-19.

Meanwhile, Department of Transportation (DOTr) Assistant Secretary for Mindanao Cluster Project Implementation Eymard Eje said in a radio interview on Tuesday morning, July 27, that the President's statement means that when it comes to expediting big ticket projects, everyone can benefit, regardless of location.

He also said that there is no "political motive" in infrastructure projects.

He also said DOTr had already rehabilitated and improved services in seaports in the region.