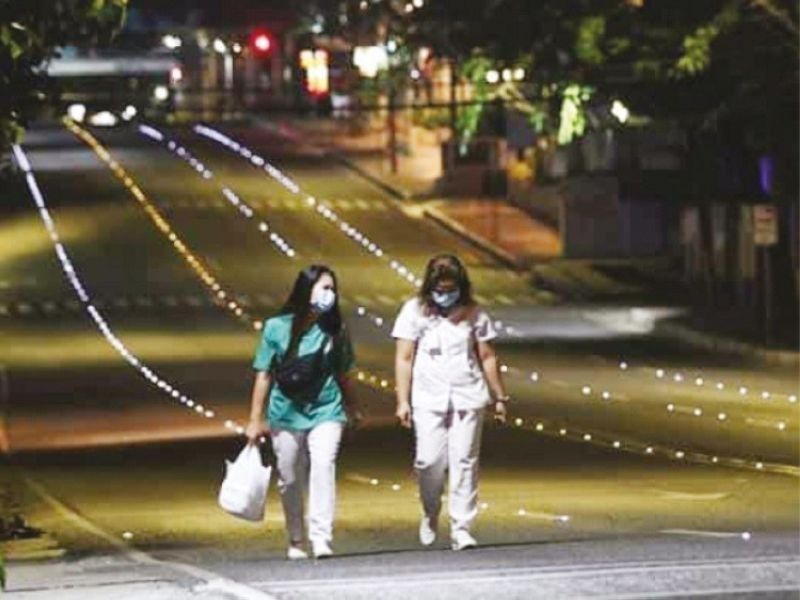 SACRIFICE. In this photo taken at the height of the pandemic in 2020, two nurses from a private hospital walk along Gen. Maxilom Ave. after their duty. The Cebu City Government and the Project Balik Buhay are set to give incentives to the nurses of private hospitals to thank them for their sacrifices. (SunStar File)

TO REINFORCE medical frontliners in Cebu City amid the pandemic, the City Government will hire 200 nurses; to encourage 350 nurses working in private hospitals, it will grant a monthly incentive of P10,000 for each of them for the next three months.

These decisions reached by the City came after 44 nurses working for the Cebu City Medical Center (CCMC) on a contractual basis resigned after they reportedly failed to receive their salaries for months. City Councilor Raymond Alvin Garcia, budget and finance committee chairman, said he already talked with the local finance committee to identify the budget for the hiring and granting incentives, and the sources of funds.

Giving away incentives is the city officials’ way of showing their gratitude to the nurses, as well as motivating them to carry on their duties, especially now that new Covid-19 cases in the city are increasing.

In 2020, the City Government also distributed cash incentives to medical frontliners, including doctors, in the private hospitals.

This time around, the City will provide incentives only to nurses.

City Councilor Eduardo Rama Jr. said there is a need to respond to the concerns of nurses in the private hospitals. He came to this realization after his talk with retired general Melquiades Feliciano, chief implementer of the Inter-Agency Task Force (IATF) Visayas.

In distributing the incentives, Rama said they will implement the system that was used in 2020: The hospitals will submit the lists of their nurses; verification of the lists will be done by third parties Ramon Aboitiz Foundation Inc. and the Department of Health 7; and the verified lists will be endorsed to the City Government.

The City will also hire 200 nurses who will be deployed to CCMC and private hospitals in Cebu City.

The city officials decided to make this move after they learned that there has been a lack of manpower, specifically nurses, in the hospitals in Cebu City.

Rama said there are still available rooms in some private hospitals, but these cannot be used because there are not enough nurses.

Rama said the lack of manpower in the hospitals has to be acted upon amid the pandemic, and he also assured that the nurses who will be hired by the City will be given their salaries on time.

The Cebu City Council started the deliberation of the proposed first supplemental budget (SB 1) amounting to P4.4 billion during its regular session on Wednesday, July 28, 2021.

Included in the proposed SB 1 is the budget for the salaries of the unpaid nurses of CCMC amounting to P21.7 million.

Cania said a total of 50 nurses in CCMC have not received their salary for the past three months, from April to June.

Acting Cebu City Mayor Michael Rama assured the medical frontliners that the City Council will act on the problem so they will get paid.

“Bayran gyud (they will be paid),” said the acting mayor.

The Project Balik Buhay (PBB) has a program that aims to help nurses attending to Covid-19 patients in private hospitals in Cebu.

The PBB Salbabida Program will be donating P15,000 per month as additional allowance to every nurse employed by the PBB private hospital partner for the months of August and September. The program is initiated by the Office of the Presidential Assistant for the Visayas with the aid of its partner foundations.

In a press statement, the PBB said its program is open to all enrolling private hospitals in Cebu and to all nurses employed by its hospital partners, “whether as full-time or project-based employees.”