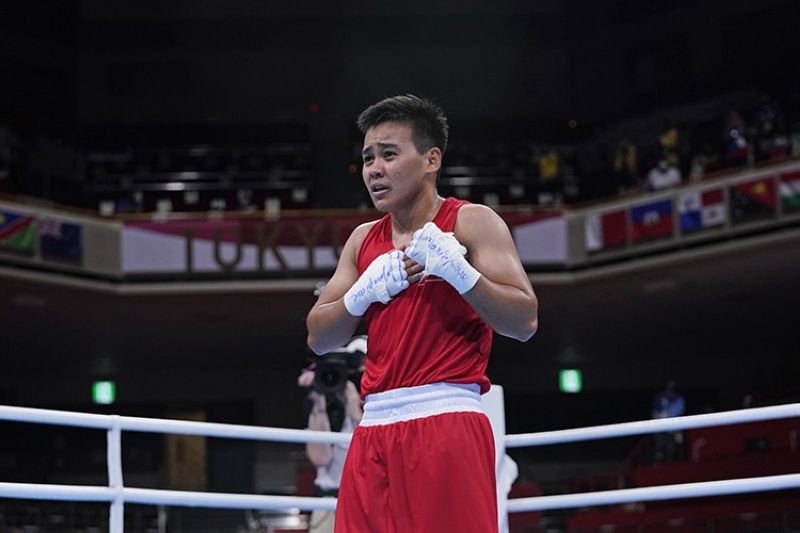 NESTHY Petecio is just two wins away from a gold medal in the 2020 Tokyo Olympics after securing a spot in the semifinals of the Women’s Featherweight division on July 28, 2021 at the Kokugikan Arena in Tokyo, Japan.

Petecio defeated Colombian Yeni Arias by a 5-0 decision in the quarterfinals Wednesday, July 28, 2021. She is assured of a bronze medal in the Olympics.

The 29-year-old Petecio, one of just four bets for the Philippines in boxing, got the nod of all five judges. Argentinean judge Roberto Servide and Aussie judge Maksim Sulejmani saw it as a landslide with identical 30-27 scores. Bulgarian judge Mariya Kavajlieva, Russian judge Yaroslav Renev and Chinese judge Zhang Guo had closer with similar 29-28 scores.

Petecio had a strong start winning in all the five judges’ scorecards. Arias did a better job in the second round and won in two of the three judges’ scorecards but Petecio finished the fight strong to get the convincing victory.

Petecio, a gold medalist in the 2019 AIBA Women’s Boxing World Championships, faces Italian Irma Testa in the semifinals on July 31.

Testa earned her semifinals slot after beating Canadian Caroline Veyre via a 5-0 decision.

Though just 23 years old, Testa has already competed once in the Olympics, wherein she finished fifth in the Women’s Lightweight division in Rio de Janeiro, Brazil. She has also won a European Championship in 2019, a silver medal in the Youth Olympic Games and competed in the World Championships in 2018 and 2016.

Meanwhile, Remedy Rule ended her Olympic campaign after failing to advance to the finals in the Women’s 200M Butterfly event.

Rule finished 15th in the semifinals with a time of 2:12.89. Only the top eight swimmers advanced to the finals.

Luke Gebbie also bowed out of the Olympics after finishing 36th in the Heats. Gebbie failed to advance to the semifinal round of the Men’s 100M Freestyle with a time of 49.55 seconds.

On the other hand, Cebuano weightlifter Elreen Ando finished seventh in the Women’s 64KG Weightlifting at the Tokyo International Forum.

Ando finished with a total of 222KG after lifting 100KG in the snatch and 122KG in the clean and jerk. (EKA)