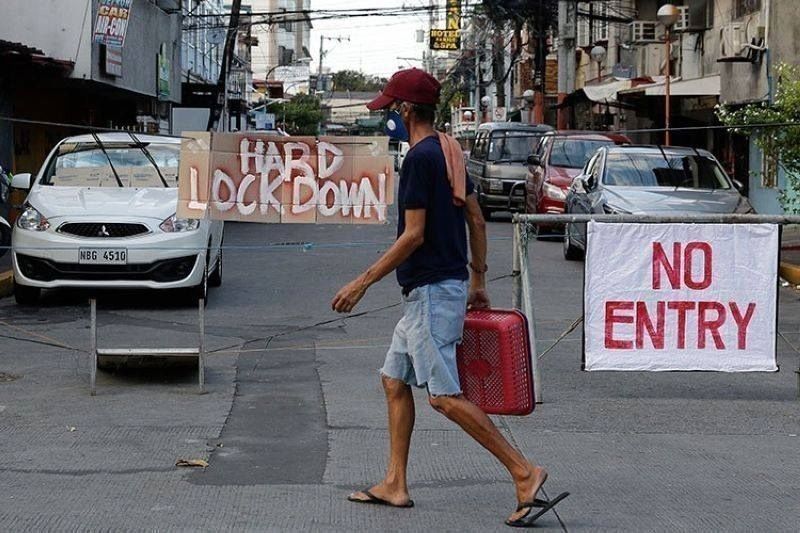 MANILA. In this photo taken in 2020, a community in Metro Manila is placed under granular lockdown due to a rise in Covid-19 cases. (File)

In a press conference Wednesday, July 28, 2021, Octa founder Professor Ranjit Rye insisted that another surge in infections is in the early stages in the National Capital Region (NCR) and a “circuit breaker” lockdown would curb transmission.

In an epidemic, a circuit breaker refers to restrictions aimed at curbing transmission.

Rye said new cases average 1,000 a day this week compared to around 600 a day last week in the NCR.

He also said the reproduction rate in the NCR, or Metro Manila, has gone up to 1.33.

“While we are still awaiting scientific confirmation, Octa believes the more contagious Delta variant may be driving this surge,” he added.

He said the earlier and harder the lockdown would be, the more it would be effective just like what the New Zealand and Australia did.

“Studies have shown that hard lockdowns that are implemented early when cases are still low and on the rise tend to be shorter and are less costly for the economy. In short, a ‘go early, go hard’ strategy, if implemented, will save lives and save livelihood,” said Rye.

“In this light, we urge the national government not to wait for the numbers to explode or for our hospitals to fill up before it decides,” he added.

President Rodrigo Duterte, in his State of the Nation Address on July 26, said he might have to place the country under lockdown again if Delta cases continue to increase further.

However, the Department of Health (DOH) on Tuesday, July 27, said there is “no definitive evidence of a surge” in the NCR.

But the DOH said it was closely monitoring areas with increases in rates of transmission based on two-week growth rates (TWGR), average daily attack rate and/or health care utilization.

The DOH said the observations of Octa were noted, but maintained that such observations should be carefully verified.

Based on current data analysis by the DOH Epidemiology Bureau and Fasster, NCR is showing a 19 percent increase in its TWGR and attack rate of six cases per 100,000 population, which is at moderate risk.

Presidential Adviser for Entrepreneurship Joey Concepcion agreed with Octa Research fellows and said the government should “hit it now” in order to save the final quarter and lessen the pandemic’s impact on the economy.

“I think the fourth quarter is the most important quarter because this is the quarter that consumers spend because of Christmas, election spending will come. This is the quarter where most businesses who have lost money in the beginning of the year will be able to regroup,” he said.

The University of the Philippines Philippine Genome Center has detected 119 Delta variant cases in the country, with four deaths.

The cases were detected in the NCR, Calabarzon, Central Luzon, Ilocos, Northern Mindanao and Davao.

Meanwhile, Parañaque Mayor Edwin Olivarez said the Metro Manila Council is open to suggestions to reimpose a lockdown to prevent the spread of the Delta variant.