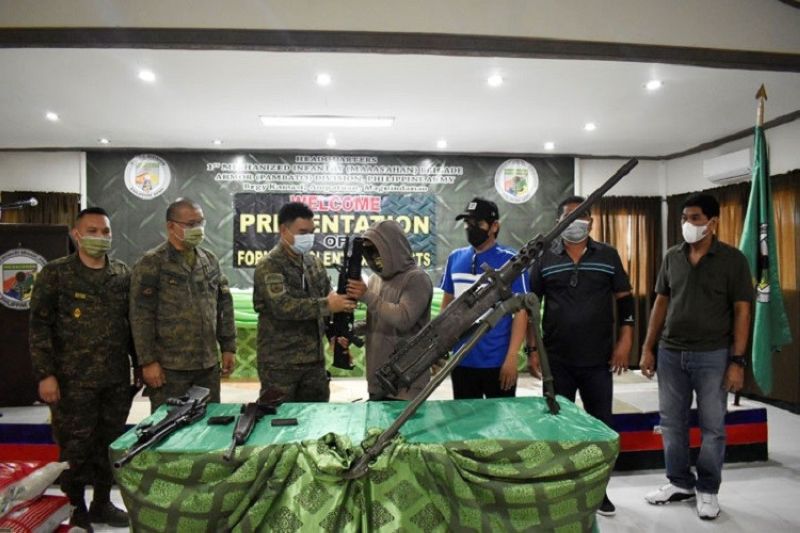 ZAMBOANGA. Four members of the Bangsamoro Islamic Freedom Fighters (BIFF)-Bungos faction surrender Tuesday, July 27, due to the relentless military operation against them in Maguindanao. A photo handout shows one of the four surrenderers handing over a high-powered firearm to Colonel Pedro Balisi, Jr., Mechanized Infantry Brigade commander, at his headquarters in Kamasi village, Ampatuan, Maguindanao. (SunStar Zamboanga)

FOUR members of the Bangsamoro Islamic Freedom Fighters (BIFF) have surrendered brought about by the relentless military operation against them in Maguindanao, military officials announced Wednesday, July 28, 2021.

“Due to the relentless focused military operations of our troops in Central Mindanao, most of the terrorists are already starving, hence, they choose to surrender,” Vinluan said.

He added the BIFF surrenderers said the series of offensives conducted by the military made them realize that they have nowhere to go but to either surrender or die while fighting for their pointless battle.

“The influx of BIFF surrenders is a testament to the dwindling of the group. We expect that more terrorists will lay down their arms in the coming days as we bolster our offensives on the area,” Balisi said.

They were placed under custodial debriefing at the 1st Mechanized Infantry Brigade headquarters.

“Now is the best time for you to surrender,” Uy said.

On Monday, July 26, the deputy commander of the BIFF and six followers surrendered in Maguindanao.

“The offensives of the Joint Task Force Central will continue despite the mounting number of BIFF members who are now deciding to return to the folds of the law,” Vinluan said.

“Rest assured that all our operations adhere to the Human Rights and International Humanitarian Laws,” Vinluan added.

Since January, JTF-Central neutralized a total of 145 BIFF members, of which 69 were killed, 74 surrendered, and two were apprehended. (SunStar Zamboanga)