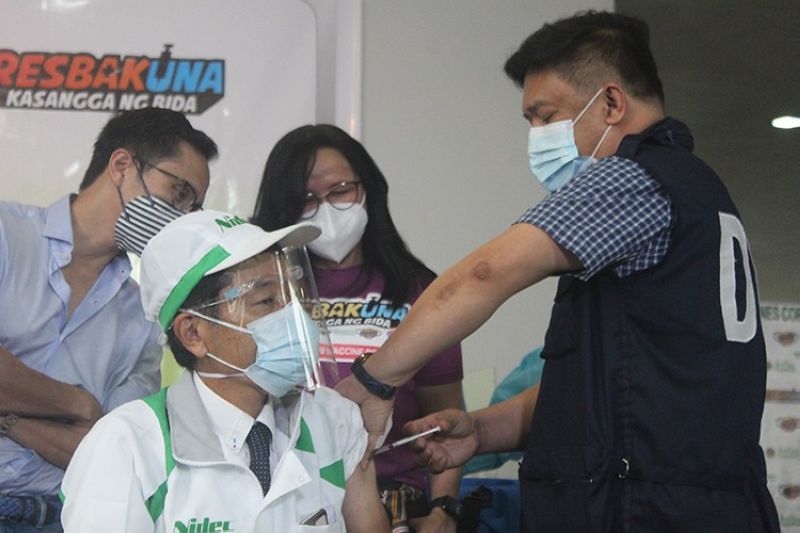 THE vaccination drive for economic frontliners in the country began in Subic Bay Freeport on July 27, 2021 with five workers at Nidec Subic Philippines Corp. getting their first shot in a ceremonial launch.

“This undertaking is very important because the workers are the backbone of the economy and it is important that we maintain their well-being and safety at all times,” she said.

The ceremonial vaccination was organized by the SBMA, the Department of Health (DOH), the National Task Force Against Covid-19 (NTF), and the Inter-Agency Task Force on Emerging Infectious Diseases (IATF-EID).

Among the first to be vaccinated were Nidec President Kiyoshi Sato, the firm’s general manager Marissa Tamayo, and Carol Adamos, Dexter Saludez, and Ruel Fernandez, all workers at the manufacturing company.

Sato said the Nidec employees were honored to be chosen for the launch of the A4 mass vaccination in the Philippines.

“Due to the support that we received from SBMA Chairman Eisma, the DOH team and the Philippine government, we are able to provide the vaccine to you all today, free of charge,” Sato also told Nidec workers.

Sato said the company has been operating in the Subic Freeport since 1998 as a factory for hard-disc drive motors, and has invested $100 million to produce gearboxes mainly for robotics and other automation-related industries.

“Nidec Subic currently has 458 workers and plans to increase to 800 employees by this year. We plan to continue to grow this company and continue to value the health and well-being of all our employees,” Sato added.

A total of 300 doses of Sinovac vaccine arrived in Subic on July 27 for the initial inoculation drive for economic frontliners.

Eisma said Nidec workers will receive the rest of the doses in the next two days.

She added that she has also received a commitment from the National Government for the weekly release of vaccines for workers in the Subic Bay Freeport Zone to boost the A4 vaccination program.

“From the men and women of the Subic Bay Freeport, we thank you for the A4 vaccination program that is supported by President Duterte,” Eisma told Roque during the ceremony.

“We are happy that our economic frontliners may do their work without fear of getting serious effects of Covid-19,” she added.

With the commitment for additional vaccines, Eisma urged Freeport workers on July 27 to register for the vaccination program.

She said while the vaccine is subject to availability and approval by the DOH, the SBMA will coordinate the registry of workers qualified under the A4 priority group.

As of now, the SBMA and the DOH are continuing with the vaccination of Subic stakeholders in the A1 to A3 priority groups, she added. (Ric Sapnu)