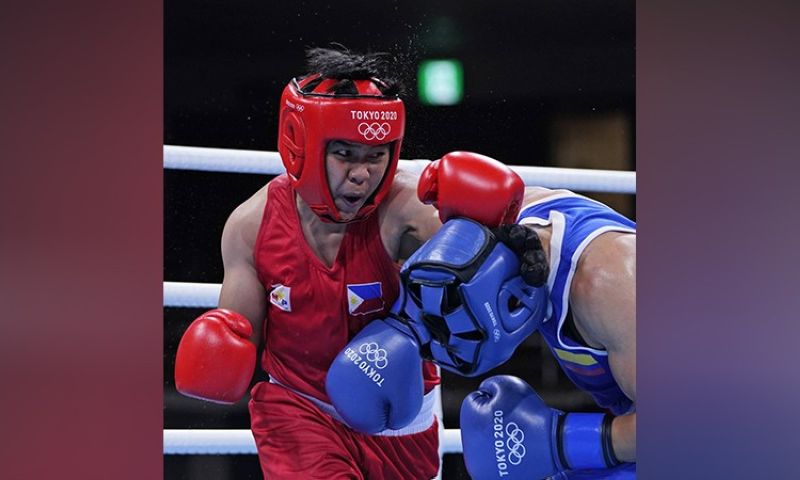 A PUNCH FOR A DREAM. Boxer Nesthy Alcayde Petecio pulled off a unanimous decision victory over Colombia's Yeni Arias Castaneda, 5-0, in their Tokyo 2020 Olympics women's boxing featherweight quarterfinals clash to barge into the semi-finals. She is already assured of a bronze medal, and is two wins away from capturing another gold medal for the Philippines. (AP)

"GRABE ko ka thankful sa Ginoo kay sya jud hinungdan, gitagaan ko niya og extra kusog taas sa ring (I'm so thankful to God because he is the reason, he gave me extra strength on top of the ring)," Nesthy Alcayde Petecio, who was on the verge of tears, said after exacting revenge against her 2018 Aiba World Boxing Championship tormentor Yeni Marcela Arias Castañeda of Colombia via a unanimous 5-0 decision victory in their women's boxing featherweight quarterfinals collision at the Tokyo 2020 Olympics on Wednesday, July 28.

Nesthy is two wins away from an Olympic gold medal.

Her victory also ended the 25-year medal drought of Philippine boxing in the Olympics after Mansueto "Onyok" Velasco pocketed a silver in the 1996 Atlanta Olympics.

The 29-year-old 2019 Aiba World women boxing champion Nesthy, who was taught the ropes of boxing by her father Teodoro at age nine, way back in their home, which was made of tarps and woods in Bago Gallera, Davao City, is already assured of a bronze medal. She will next clash against Italy's Irma Testa, whom she is facing for the first time, in the semi-finals on July 31.

In a Facebook Messenger video call interview, the Davao del Sur native said, "Happy kaayo ko, Ma'am, kay dili lang ni para nako o para sa akong pamilya. Para gyud ni sa atoang tanan, sa Philippines. Sige ko pray every night nga ubanan ko niya sugod palang diri sa pag-abot nako sa Japan ug makauli ko (I'm very happy because this is not just for me or my family but this is also for all of us, the Philippines. And I've been praying every night for God to be with me the moment I arrived in Japan and until I go home)."

"Si champ Haidie nakaya niya, kaya pud namo. Inspired gyud ko sa iyang pagdaug (Champ Haidie made it, we can also do it. I'm so inspired with her victory)," she said.

Nesthy threw solid punches and played smart against an aggressive Castañeda who was seen chasing the world champion since the first round.

Coach Nolito "Boy" Velasco said he studied the Colombo boxer's video fight against an opponent from Bulgaria until 11 p.m. on Tuesday, July 27, and told Nesthy about the technique that she must apply.

"Sabi ko pagsuntok nya atras maliit pa side atras naman kasi baka aabutan mas maraming suntok ang Colombia. Sabi ko wag syang pakorner o padikit kasi yan paborito nya. Sa second round, nag relax si Nesthy, pagsuntok nya saka sya atras nakukorner sya. Sabi ko hindi pwede nang ganun. Tyaga ka nalang kasi lamang na tayo. Pagsuntok atrasan mo, balikan side, balik ulit'. Na-maintain nya hanggang sa huli. Sabi ko ibuhos na nya lahat sa third round (I told her to punch and take a short distance on the side as she might be hit by the counter from Colombia. I told her not to allow herself to be cornered or be close because that's what the rival's favorite. In the second round, Nesthy was cornered whenever she throws punches. I said it won't do. Just persevere because we are leading. When you punch, distance yourself and hit the side and distance again'. She maintained that until the end. I said to give it all she got in the final round)," the veteran coach recalled.

He said that while he was shouting instructions to Nesthy at their corner, a technical official approached him to keep his voice low. Coach Velasco laughed, saying, "Ang lakas kasi talaga ng boses ko Ma'am. Mabuti nalang kaibigan namin yung lumapit sa akin (My voice was loud. It's just good that it was our friend who approached me)."

Nesthy said she found herself relaxed during the fight as she was constantly reminded to just enjoy it and not to feel any outside pressure.

Nesthy's mother, Prescilla, who watched the match with her husband and other children in their Barangay Tuban home in Sta. Cruz, said she can't help but cry tears of joy after her daughter won.

"Sobrang kalipay Ma'am ganina sa iyang dula. Dili ko kasabot, tanang pag-ampo, tanang syagit gihimo nako gyud (I'm overjoyed with her fight. I can't understand the feeling, I said all prayers and shouted at the top of my lungs)," she told this writer in a separate Messenger audio call interview.

Nesthy called her family on the eve of the fight and after winning the quarterfinals.

The proud mother said, "Nisalig mi sa kakayanan ni Nesthy. Nakita ko nihilak sya sa sobrang kalipay sa iyang paningkamot. Nagtawag sya ganina dako iyang katawa. Kaya na sa among anak. Go for gold! (We have always believed in Nesthy. I saw that she cried out of sheer joy that her sacrifices have paid off. She called us and she was laughing. Our daughter can do it. Go for gold!)"

Nesthy said, however, that she is focusing on one game at a time.

"Pirmi nako ginaingon Ginoo na bahala sa tanan. Kinahanglan trabahuon nako og isalig sa Iyaha (I've been saying that I entrust everything to God. I will have to work hard for it and trust him)," the eldest Petecio child said.

Coach Velasco urged Filipinos to pray for the country's boxers. "Tuloy-tuloy lang po ang pagsuporta nyo at pagdarasal, malalampasan din natin ito, paisa-paisa lang, step by step lang (Please continue supporting and praying for our boxer, we can get through this, one step at a time)."

Winning a bronze or reaching the semi-finals, according to him, is the toughest challenge. But he said once you break the barrier and reach the medal round, the pressure is not as much anymore.

Petecio's father was equally proud and happy of what Nesthy has already achieved. "Ginabati ko karon og sobra kaayong kalipay. Ang pangarap lang nako maabot lang ni Nesthy ang Olympic ring, wala ko nangarap og medal. Sya diay nangarap ani (I am just so happy. I only dreamt of seeing her play atop the Olympic ring and I never dreamt of her winning a medal at all. But she was the one who dreamed of winning an Olympic medal)."

Teodoro also dreamed of playing in the Olympics when he was in high school. He started competing in local competitions and even reached the Southern Mindanao Regional Athletic Association (SMRAA) Meet where he only played one bout as he was disqualified to continue for being overweight in a follow-up weigh-in. His Olympic dream was all forgotten when his family had to be relocated to Butuan City and his father could no longer support his boxing.

When he got married, he was excited to pass on his dream to his first child. But to his surprise, their baby turned out to be a girl!

He taught Nesthy for two years without the proper equipment while training at their yard in Bago Gallera until a teacher at Crossing Bayabas National High School donated boxing gloves and punch mitts when he already took in about 11 kids around the area and also trained them. She also trained Nesthy's younger sister NiceZzaa and brother Norlan.

One of his boxers, Jayar Inson, has become a professional fighter while the others did not pursue a career in the sport.

While learning the ropes of boxing, Nesthy and her siblings would scour the streets for scrap metals to sell or vend yema on consignment so they could have allowance in going to school or to buy a kilo of rice for the family. Their father then was working at Iluminada Farms by collecting chicken dung.

Philippine Sports Commission (PSC) Chairman William "Butch" Ramirez praised Nesthy, saying, "It was one of the best fights from the tough girl of Sta. Cruz. In all three rounds, she was very smart and wily. Go for gold, Nesthy!"

The PSC chief said Nesthy has to hurdle the semis first to realize her gold medal dream.

Association of Boxing Alliances in the Philippines (Abap) Secretary-General Ed Picson, for his part, said: "We always believed Nesthy could do well when she is well-prepared and when she puts her mind into her task. We hope she stays focused for her next match and goes on from there."

Her psychologist Dr. Karen Katrina Trinidad, before flying back to Manila on Wednesday, said she was confident with the positivity of Nesthy.

She had a session with Nesthy the night before her quarterfinals fight.

"Nesthy is prepared and with high morale especially after the win of Hidz. She has a very good mindset, truly a fighter," Dr. Trinidad said.