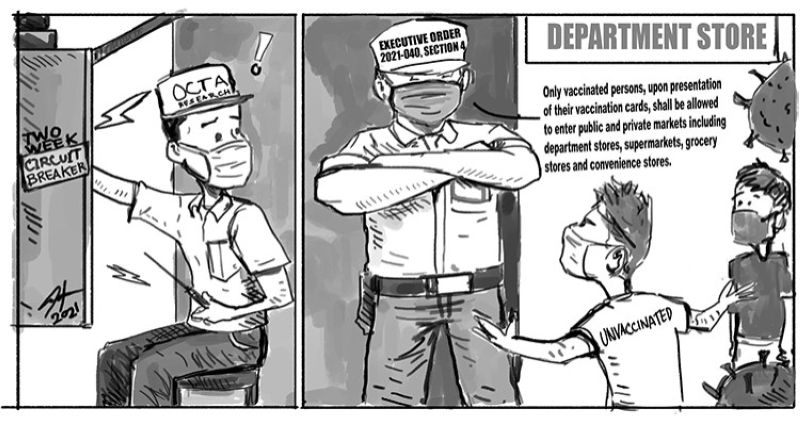 LAPU-LAPU City Mayor Junard “Ahong” Chan invites incendiary reactions from citizens after signing Executive Order 2021-040, Section 4 of which reads: “only vaccinated persons upon presentation of their vaccination cards, shall be allowed to enter public and private markets including department stores, supermarkets, grocery stores and convenience stores.”

The rule, however, will take effect on Aug, 25, 2021 yet. The mayor says what will determine the finality of the rule are the number of new cases daily and vaccine jabs served in a day.

“I will weigh Section 4 in the coming days, expect that we will soon decide on this,” Chan said in Cebuano.

Having caught wind of the EO, Lapu-Lapu citizens trooped to the vaccination centers, images of which caught the attention of netizens. Some city residents have reacted unfavorably, saying it is inhumane, a violation of people’s rights to skip vaccination, and besides, many say they have not received their jab schedules despite having registered way earlier. Still, others prefer that the City would rather re-impose the quarantine pass policy.

As of July 26, the Department of Health (DOH) 7 bulletin reports 74 new cases in Lapu-Lapu City. There are 972 active cases and a cumulative total of 8,114 cases. The spikes are also true in Mandaue City, Cebu City. A cursory look at the metro’s private hospitals shows a buildup of queues, some have to stay in ambulances for hours, awaiting if lucky a proper admission. “Full to the brim,” a health official said.

As a response to this, Cebu City Mayor Michael Rama urged citizens yesterday to stay home. This, as the city joins other cities in expanding by an hour the curfew and reimposing liquor ban in restaurants and bars. That is about how far our local officials can go in addressing the current increase in cases.

Elsewhere in the world and earlier this month, French President Emmanuel Macron led what could have inspired Chan’s decision to make vaccination a condition to enter supermarkets. This was government’s way to ambush a surge due to the Delta strain.

This week, the research group OCTA had suggested a two-week “circuit breaker” lockdown as a precautionary measure to at least bring down the transmission from over a 1,000 cases to 600 daily in Metro Manila. The suggestion, as we have learned all these months in this pandemic, is for the health care system to buy time to prepare.

The “circuit breaker,” says OCTA, will prevent a longer lockdown if the Delta cases find their way into the populace like wildfire. Inarguably, the strain had proven to be more transmissible and causing severe symptoms among those infected. Our lab results could be behind in showing local transmission, but the otherwise visible lines in our hospitals are no pictures that we are in full control.

The “circuit breaker” suggestion makes a lot of sense at this time, and Chan can lead in proceeding with his executive order, earlier even than planned. It decreases mobility and goads people to the jab centers, essentially what the OCTA proposal suggests.