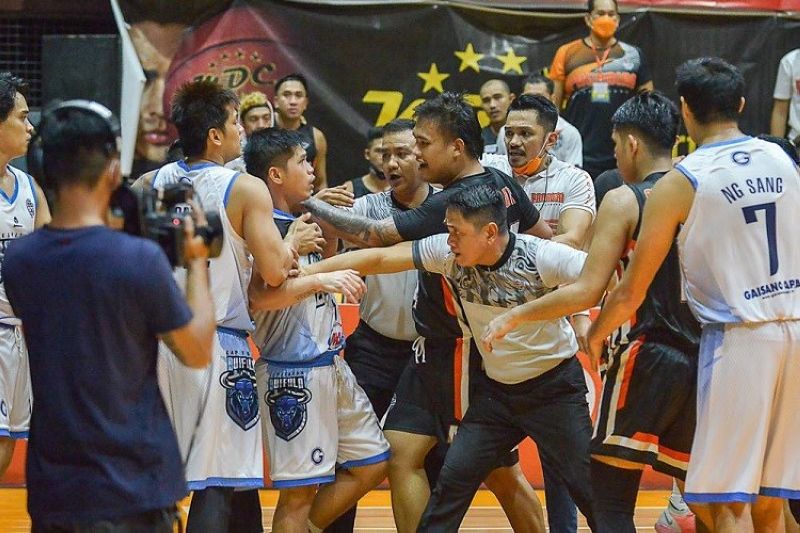 PAGADIAN. Players from Pagadian and Kapatagan are each other’s throats during their quarterfinal game on Friday. (Chooks-to-Go Pilipinas)

THE Pagadian Explorers powered past the Kapatagan Buffalo Braves, 87-76, in their winner-take-all quarterfinal match in the 2021 Chooks-to-Go Pilipinas VisMin Super Cup on Friday evening, July 30, 2021, at the Pagadian City Gymnasium.

Pagadian will face off against fourth-ranked Petra Cement-Roxas in the best-of-three semis. Game One is set on Sunday, August 1, at 4 p.m.

Tied at 72-all midway through the payoff period, Rich Guinitaran sparked a game-deciding run for Pagadian with a layup while receiving a flagrant foul from Ryan Costelo. Jeric Serrano's fastbreak layup at the two-minute mark then capped off a 12-0 run for the Explorers, and also sealed the semis spot, 84-72.

In the ensuing play, things got heated when Shaq Alanes hit Serrano hard on a layup attempt. The former was slapped with a flagrant foul penalty 2 and was ejected with 1:40 to go.

Guinitaran bounced back from a poor showing in the previous game, scoring 22 points, 11 rebounds, five assists, two steals, and two blocks for the victors. Von Dechos sank four triples on his way to 16 points, while Keanu Caballero just missed a double-double with 11 points, nine assists, and five rebounds.

Marlon Monte, the Braves' leading scorer in the tournament, missed all of his four attempts from the field, and ended up with just four points. (JNP)