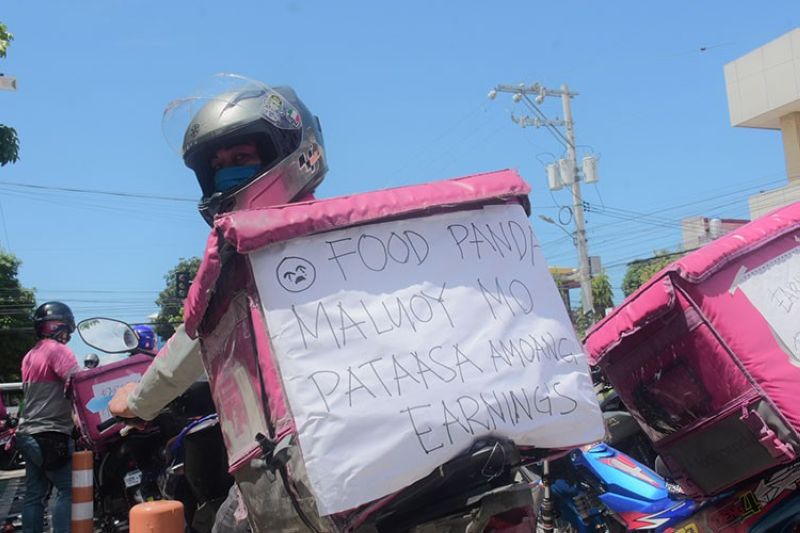 DAVAO City-based delivery riders who were offboarded by the Foodpanda management are planning to exhaust legal actions against the management.

Davao United Delivery Riders Association Incorporated President Edmund Carillo told SunStar Davao in a phone interview on Friday, July 30, 2021, that the riders are currently weighing in their actions after the management allegedly failed to show up in a supposed dialogue between the two parties and mediated by the Department of Labor and Employment (DOLE) on July 26.

He said they were surprised that neither a single representative from Foodpanda reached out to them. He said they were also not informed that the management already met with Dole prior to the scheduled dialogue on July 24.

He said they are still puzzled why the management does not want to face them and return to them their access.

Foodpanda said in a statement forwarded to the media that on the same day, all the riders who were offboarded have been invited to small group dialogues to openly discuss the situation on each case, and the possibility of reboarding them.

Carillo confirmed that the management reached out to them, but they declined and insisted that they settle their differences before DOLE.

He admitted that it is a lengthy process, but they will pursue their case against the management of the online delivery firm.

SunStar Davao reached out to Foodpanda for further comment on the rider's statement, but the management said in its recent statement that they offboarded 37 riders who were found to have violated the agreement "which all foodpanda riders agree to."

"These violations included making fake bookings and instigating other riders to jointly breach their agreements with the company," the firm said.

With regards to some riders who were slapped with a 10-year suspension, the management said it is a "system glitch" and they are addressing the error.

In terms of the complained riders’ fee, the management said it is calculated based on multiple factors that include the route and distance of the delivery, making the payment structure more organized and fair.

"Riders’ earnings on each order are transparent at the point of their accepting each order before proceeding. If an order falls under a Free Delivery campaign, foodpanda shoulders the full delivery fee so riders still get their full fee for those orders," Foodpanda said.

The company said they are "always working hard to keep operations running smoothly everyday -- so that restaurants can get orders, riders can deliver them for a living, and customers receive satisfactory service."

They also said they are open to feedback for improvements and they will continue to initiate regular dialogues to help riders better understand their earning structure and other benefits available to them.

On July 15, around 300 Foodpanda riders staged a protest on Roxas Avenue against the company.

Several riders of the food delivery service provider questioned the management's fee structure that resulted in the diminishing of their take-home pay.

In an interview with SunStar Davao, some riders disclosed that they were terminated after the management learned that many riders did not take their schedule for few days, speculating that they were on a strike.

SunStar Davao is also trying to reach out to Dole for further comments on the recent negotiation.

Meanwhile, Senator Risa Hontiveros and Bayan Muna party-list Representative Ferdinand Gaite on Monday, July 26, had urged DOLE and Congress to investigate the suspension of the Foodpanda riders in the city

Trade Union Congress of the Philippines (TUCP) Representative Raymond Mendoza also passed “A Resolution Directing the Committee on Labor and Employment of the House of Representatives, in Aid of Legislations, the Working Conditions of Online Based Delivery Riders.”

"Delivery riders are being labelled as ‘independent contractors,’ ‘business partners,’ or ‘freelancers,’ in what appears to be the strategy of Foodpanda and other online platforms to evade payment of the mandatories required by the Labor Code and related laws," Mendoza said in the resolution.

Davao City Councilor Pamela Librado-Morata also passed a resolution calling on DOLE to facilitate the riders’ concern and raise the matter to the national level.

Librado-Morata said a new legislation must be passed to address their concerns.

"What we have in mind and what these delivery riders aspire for are regulations regarding their pay, based on the distance or a fixed rate per kilometer," Librado-Morata said.

"Secondly, it will be ideal to have a standard percentage for riders per delivery charged to customer/buyer and a certain percentage charged to resto owners or merchants under Foodpanda and other similar delivery apps," she added, suggesting giving 50 percent of the 30 percent delivery fee direct to the rider.