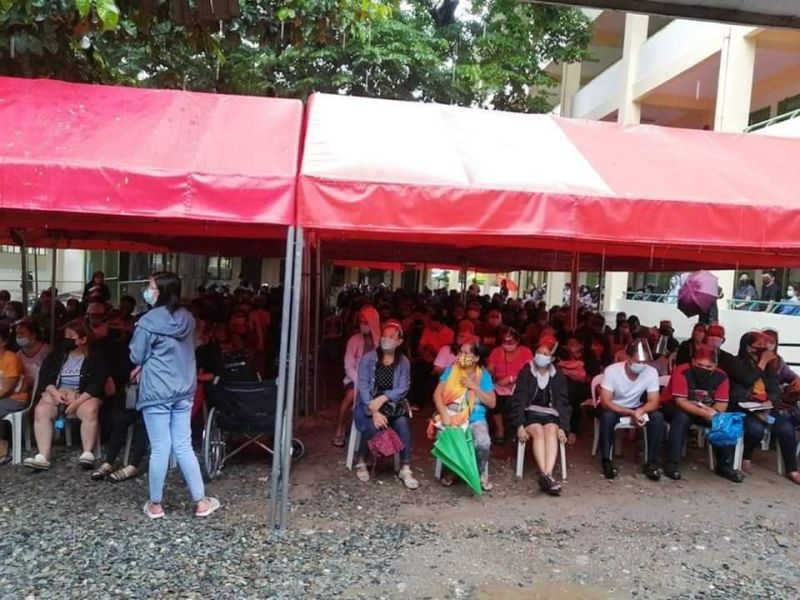 WAITING TO GET JABBED. Thousands of Angeleños patiently wait for their turn to get jabbed on July 30 at the City College of Angeles and Angeles City National High School. (Angeles City Information Office)

THE Angeles City government led by Mayor Carmelo “Pogi” Lazatin Jr. has recorded the highest number of single-day vaccination at 5,683 on July 30, 2021.

Lazatin congratulated City Hall employees, saying that they did an outstanding job.

According to Calaguas, out of the 5,683 Angeleños vaccinated, 2,634 were senior citizens who received the Johnson & Johnson vaccine at the City College of Angeles; while the other 3,049 were from the priority groups who got their second shot of Sinovac vaccines at the Angeles City National High School (ACNHS).

Calaguas also clarified that the city is prioritizing only residents of Angeles City in the vaccination sites, asking for understanding from people from other nearby towns and cities who wish to be inoculated at the city's vaccination areas.

Records from the vaccination sites show that 78,330 Angeleños received their first dose of vaccine or 19.02 percent of the 411,634 estimated total population; while 43,130 or 10.47 million percent are already fully vaccinated.

It was in June that Lazatin designated a second vaccination area at the ACNHS, targeting to vaccinate 6,000 Angeleños daily.

It can be recalled that the Department of Health granted Angeles City a "green status," meaning the inoculation system is very efficient, City Health Officer-in-Charge Dr. Verona Guevarra said.

One mobile bus also started the house-to-house vaccination of 20 bedridden elderly in Barangay Lourdes Sur East. Some 640 bedridden seniors will receive their vaccination via schedule at the comfort of their homes.

Lazatin is still urging his constituents to register online at angelescity.gov.ph to build an updated database for the city’s Covid-19 vaccination.