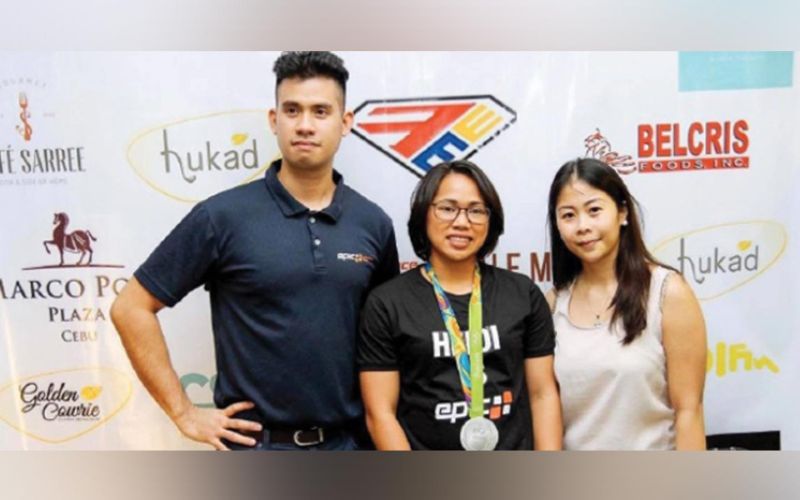 GOLDEN. Hidilyn Diaz in Cebu after the 2016 Rio Olympics, flanked by Pio Solon and Silver Mercado of Epic Performance and Fitness.

I knew I would see it in my lifetime but I never imagined it hitting so close to my heart.

I first met Hidilyn Diaz when we invited her to Cebu after she won a Silver Medal from the Rio Olympics. It was already her third Olympics then. I was impressed by the humble and shy demeanor, and saw the inner resilience and courage of her character.

We have had the chance to host her training in our facility numerous times, and in several different speaking engagements we’ve bumped into each other.

As I reflect on this historic achievement of Hidilyn, I cannot help but get teary-eyed. Those who have had a glimpse of her struggles and challenges over the past decade can attest to her indomitable spirit and strength of character.

Who you are, precedes what you do

Hidi performs resiliently because she is resilient. She performs with courage because she is courageous. She will be the last person to say that she is perfect. In fact, in our conversations, she has always highlighted not so much her achievements but all the things she needs to work on. This is something that all of us can learn from. In a world where perception has become king, may we realize that perception is only as good as the substance behind it.

Surround yourself with capable, competent individuals

Members of Team HD are capable at what they do. While it is often easier to hire a relative, a longtime friend, or someone you know, one has to prioritize competence over familiarity.

While working with people you know can be good, a higher degree of importance should be given to actual competence. There is a stark difference between someone who is passionate about something versus someone who is immersed in the subject at hand.

Understand the role of specialization

In the last decade, I’ve always recommended to organizations who are serious about performance to hire a good sports nutritionist, a sports psychologist, a strength and conditioning coach, and recovery systems.

Keep in mind, just because someone has certification does not mean they are specialists or are competent. With Team HD, Kaiwen Gao is the Olympic weightlifting coach; Julius Naranjo, strength and conditioning coach; Jeaneth Aro, sports nutritionist; and Dr. Karen Trinidad, sports psychologist. All of them found margins to improve on in their respective fields; the aggregation of those marginal gains was the 1kg difference between gold and silver.

What is the overwhelming role of sport in our society?

I’ve said this over and over again, sport is a reflection of the society in which it exists. It is a mirror of the society’s current condition.

For a third-world country like ours, sports seldom receives priority from the government and from private institutions, given that there are bigger problems at hand. But despite this, we now cannot be dismissive of the role of sports in our society.

When was the last time our “DDS” and “Dilawan” friends agreed on something that they together can be proud of? I pray and hope that all sectors, public and private, start to realize the importance of sports.

Can local government units now start to begin funding more sports complexes as a means for the citizenry to stay active and healthy, and for children to get involved in sports for discipline and stay off of vices?

Will we now see schools and higher education institutions give the respect and regard sports programs deserve by funding them, and executing them in a better manner and not think of it as an expense but rather an investment?

Will more sports coaches now start to professionalize the ranks and elevate their standards according to globally acceptable norms? Will sports leagues start by setting the example of raising the standard of sports events by better organizing and officiating?

As I write this article, I am still hopeful that more medals can be won for the country from boxing and other sports. Cebu has now produced Olympians in Judo, Skateboarding and Olympic weightlifting in this iteration of the Olympic games, yet we do not have world-class facilities for these sports in this city. I have no doubt in my mind that the talent is there, but the structure and systems to consistently harness that talent is maybe something we should work on.

May this victory in the Olympics give us hope and rekindle our love for our country as we live in these interesting times.