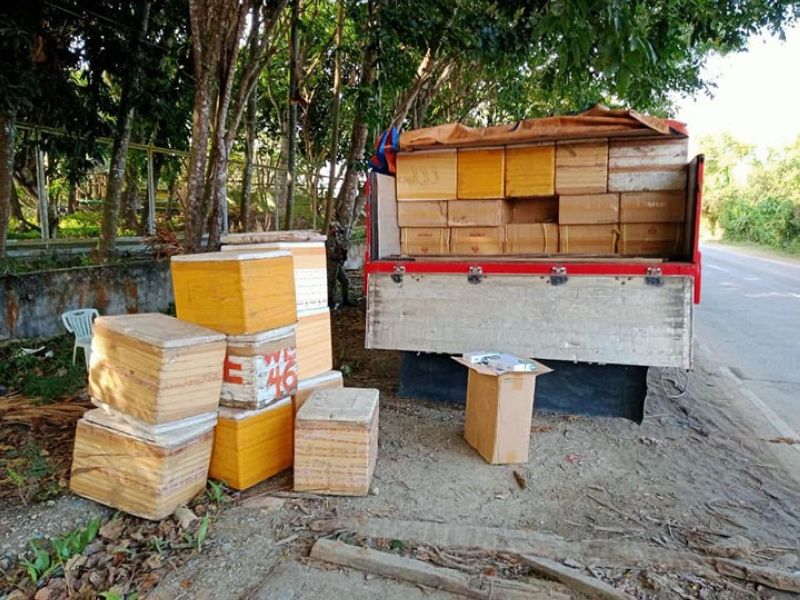 ZAMBOANGA. Troops of the 74th Infantry Battalion seize some P4.3 million worth of smuggled cigarettes Friday, July 30, at a checkpoint in Sitio Malasugat in Sangali village, east of Zamboanga City. A photo handout shows the pile of master cases of cigarettes was covered with Styrofoam coolers while being transported aboard a cargo truck. (SunStar Zamboanga)

GOVERNMENT troops have seized some P4.7 million worth of smuggled cigarettes in Zamboanga City and the province of Zamboanga del Sur, the police announced Saturday, July 31.

Ylagan said troops of the 74th Infantry Battalion were manning a checkpoint when they flagged down a cargo truck loaded with 100 master cases of cigarettes worth P4.3 million covered by empty Styrofoam coolers.

He said the driver of the van, Jay Villarosa, 43, and his companion, Abby Jadjail, 31, failed to present any documents to show the legality of the shipment.

Ylagan said he confiscated smuggled cigarettes were placed under the custody of the Zamboanga City Police Office’s Station 3 for eventual turnover to the Bureau of Customs for proper disposition.

He said the policemen were conducting checkpoint operations when they intercepted a four-wheel vehicle driven by Hermie Ibañez, 34, a resident of Zone 1, Culianan village, Zamboanga City.

Ylagan said Ibañez’s vehicle was found to be loaded with 751 reams of undocumented cigarettes consisting of 502 reams Fort and 249 Famous cigarettes worth P450,600.

He said Ibañez including the confiscated cigarettes and vehicle were placed under the custody of the Pagadian City Police Station for proper disposition.(SunStar Zamboanga)