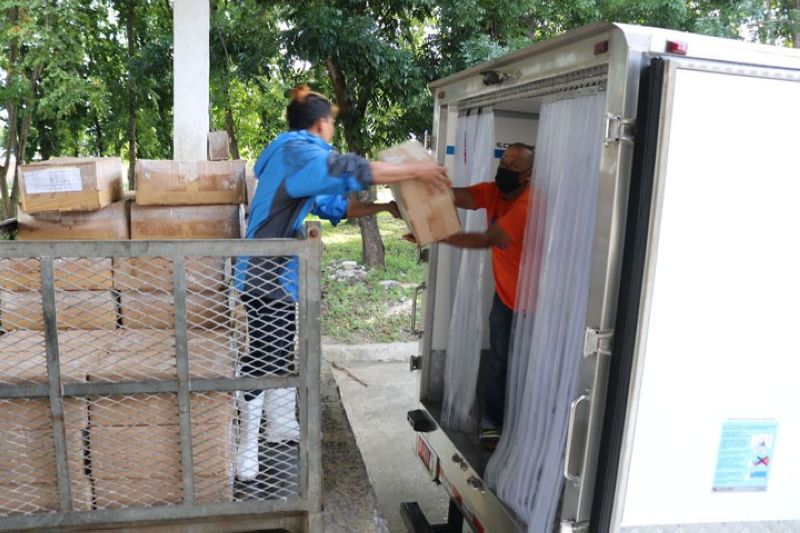 ZAMBOANGA. The Bureau of Fisheries and Aquatic Resources (BFAR), through its program Operations Plan (Oplan) Isda, has facilitates the shipment of 1.59 metric tons (MT) of fresh frozen Matambaka and Galunggong from this city to Bohol. A photo handout shows fish port workers load packed fresh fish into BFAR’s refrigerated van that transported the product to Bohol market. (SunStar Zamboanga)

THE Bureau of Fisheries and Aquatic Resources (BFAR), through its program Operations Plan (Oplan) Isda, has facilitated the shipment of 1.59 metric tons (MT) of fresh frozen Matambaka and Galunggong from this City to Bohol.

BFAR Regional Director Isidro Velayo, Jr. said in a statement that the fish were shipped Tuesday, July 27, and arrived in Bohol Saturday, July 31.

Velayo said the fish were loaded in a BFAR refrigerated van to ensure that the fish is well preserved and reaches its intended destination in the Bohol market.

Velayo said the fish were stockpiled in a cold storage facility and supplied by the Basilan Farmers and Fisherfolk Cooperative.

The Oplan Isda, which was launched on June 8 here, is one of BFAR’s initiatives in establishing a strong direct link between producers and the sellers of fish commodities and to provide an additional supply of fishery commodities at an affordable price to the fish deficient areas in the country.

BFAR collaborated with the Fisherfolk Cooperative of Basilan on the provision of fish products, which is continuously supported by the Department of Agriculture.

It also encouraged other fisherfolk associations to collaborate and join in the Oplan Isda project. (SunStar Zamboanga)