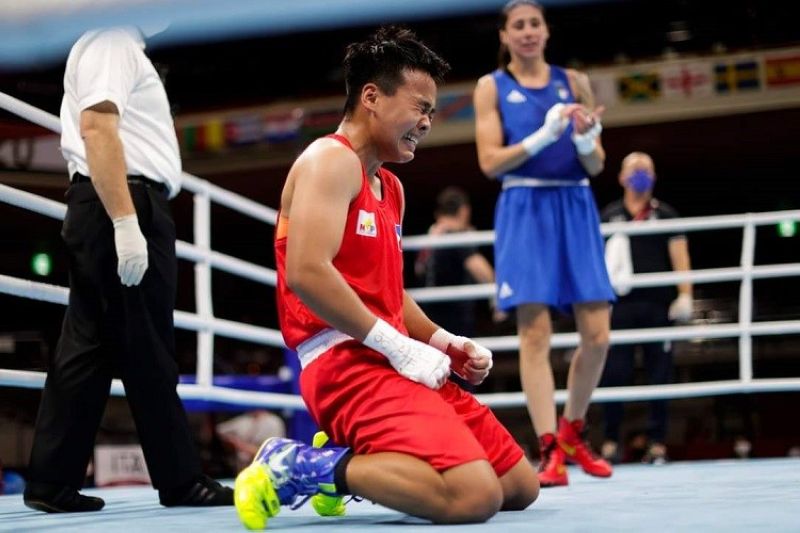 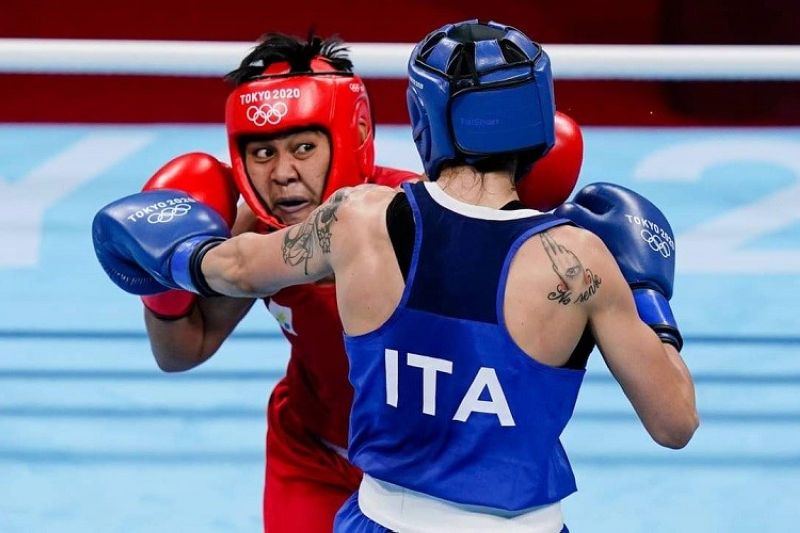 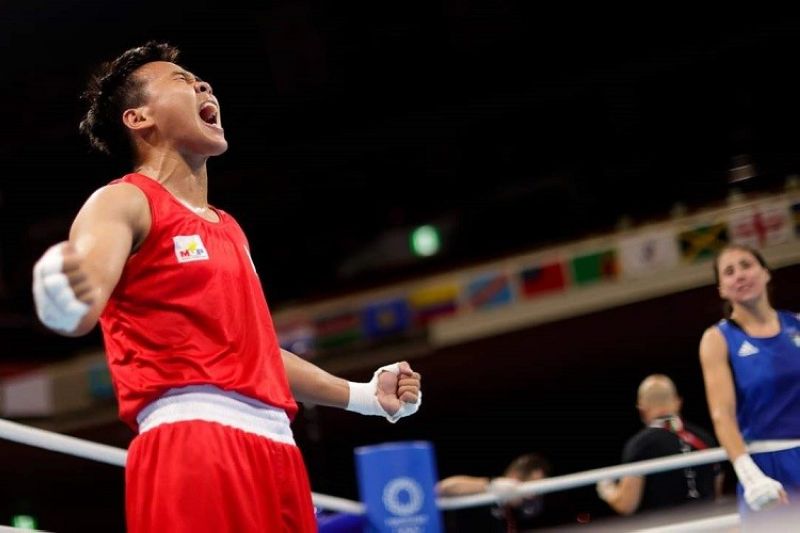 PHILIPPINES' second gold medal prospect boxer Nesthy Alcayde Petecio was overwhelmed by the support of Filipinos who prayed for her and flooded her social media accounts with messages of congratulations and encouragement, as well as those who sent her private messages too many for her to read one by one and left her mobile phone hanging several times. This after she booked a ticket to the women's featherweight finals following a 4-1 win over Irma Testa of Italy on Saturday, July 31.

(To all Filipinos who supported me, who believed in me, in my ability, who messaged me, who posted on my wall, tweeted me, and prayed for me, I felt your support during my fight. Your prayers, I felt it. I needed to fight because my fellow Filipinos were praying for me and believed in me. Thank you very much)

(I'm so thankful for their messages of "Go for gold!" and "We're praying for you." I'm so blessed and thankful to the people who believed in me. They gave me strength aside from my family. All your prayers also gave me strength on the ring.)

Petecio first thanked God for the blessings he gave her. "Sa kusog nga gihatag niya sa akoa sa taas sa ring samot na sa kadaugan na gihatag nya sa akoa (The strength that he gave me on the ring and most importantly for the win that he gave me)," she said.

She also thanked Philippine Sports Commission (PSC) Chairman William "Butch" Ramirez along with Commissioners Charles Raymond Maxey and Ramon Fernandez; her Association of Boxing Alliances in the Philippines (Abap) family - chairman Manny V. Pangilinan, president Ricky Vargas, and secretary-general Ed Picson; Philippine Olympic Committee (POC) President Bambol Tolentino who she said hugged her after her semifinal win over Irma Testa of Italy; and her coaches Australian Don Abnett, Nolito Velasco, and Reynaldo Galido who have been supporting her and believing in her whether she wins or loses.

(I also thank my family, my siblings, and my friends. I can't thank each one of you personally as my cellphone hanged. I can't usually reply because if I do, other messages will also keep coming. I thank my teammates who helped prepare me even when we were in Thailand.)

Her parents Teodoro and Prescilla heaved a sigh of relief after their daughter's triumph. Prescilla said, "Nagmata mi 1:30 a.m. wala najud mi katulog og balik sa kakulba (We were not able to sleep again because of nervousness)."

There were about 50 people, including their relatives and neighbors, who watched in their home to cheer for Petecio.

Teodoro, who once played in the Southern Mindanao Regional Athletic Association (Smraa) Meet when he was in high school, thanked his daughter for fulfilling his Olympic dream.

World No.2 Petecio, a native of Barangay Tuban in Sta. Cruz, Davao del Sur, said she woke up at 5 a.m. to check her weight at 5:30 a.m. before going to the Kokugikan Arena for the 6 a.m. weigh-in. She said that it was like any ordinary day and an ordinary tournament for her.

(I just thought it's just a game. I didn't really think it's the Olympics. Just chill so I would feel light. Of course, I thanked God for the new life he gave me. I was not affected by the pressure as I didn't want to repeat what happened in the qualifier. Just chill, go with the flow.)

She and Testa faced each other for the first time so the first round was like a wait-and-see as they were first measuring each other. But Petecio claimed that since her opponent was taller, the Italian's punches would seem clearer. She said playing the Italian in her comfort zone did not work well for her so she was told by coaches Abnett and Velasco to switch strategy in the second round. That's when the Filipina's powerful body shots and wild hooks connected and hurt the Italian.

"Pag-ingon nga 5-0 ko sa first round, nag-pray gyud ko, 'Kung ihatag nimo ni sa akoa ihatag gyud nimo.' So wala ko nag-mind gyud na lamang sya sa akoa. Nisampit ko sa Ginoo pag second round. Sobra ko na-excite. Na-boost akong energy na nakuha nako ang second round, 5-0, unya 5-0 sya sa first round. Na-excite kog pag-ayo sa third round kay kabalo ko mas magsumbaganay pajud mi (When I was told I was behind in the first round, I prayed, `If you will this you will really give it to me.' So I did not mind if she was leading. I called on to God in the second round. I was really excited. My energy was boosted when I got the second round, 5-0, while she also won, 5-0, in the first round. I got excited in the third round because I knew that we would really battle it out)," said the Aiba 2019 Women's World Boxing titlist who, at age nine, started learning the ropes of boxing from her father Teodoro while the latter was working at Iluminada Farms in Davao City. The family was then residing in Bago Gallera where the eldest Petecio child only trained with scraps of clothes made into gloves and slippers as punch mitts.

She did not let her guard down in the final three minutes after she dominated the second round as she was convinced that her rival also wanted to win.

Dabawenyo PSC chief Ramirez, who hails from Padada, Davao del Sur, lauded Petecio's fighting spirit, saying, "Determinado (Determined). Petecio has the will to win. Isog gyod ning taga Sta Cruz (Natives of Sta. Cruz are really brave). We salute her. Murag ga-suntok pod mi ni Bambol (It seemed like Bambol and I were also boxing)." He and Tolentino watched and cheered for Petecio and Carlo Paalam who advanced in the men's flyweight quarterfinals after a 5-0 unanimous decision win over Algeria's Mohamed Flissi.

Picson, for his part, said: "Nesthy fought an intelligent fight. She closed the distance between her and the Italian girl and overwhelmed her with her power. If she fights as smartly and listens well to coach Don Abnett, who is our chief strategist, there’s no reason why she can’t get the second Philippine gold!"

Commissioner Maxey also said that Petecio has matched the best finish of the country in boxing competition in the Olympics as she is already assured of a silver medal. Mansueto "Onyok" Velasco was the last one who won a boxing medal, which is silver, in the 1996 Atlanta Olympics.

"Now she will seek to surpass the feat of Anthony Villanueva and Mansueto Velasco when she guns for the gold. I firmly believe she can do it. Go Nesthy!" Maxey, also from Davao City, added.

Petecio's arch-rival Sena Irie of Japan, who escaped with a 3-2 split decision victory over Karriss Artingstall of Great Britain, will be her final assignment on August 3. Irie has defeated the Filipina twice in their past three meetings.