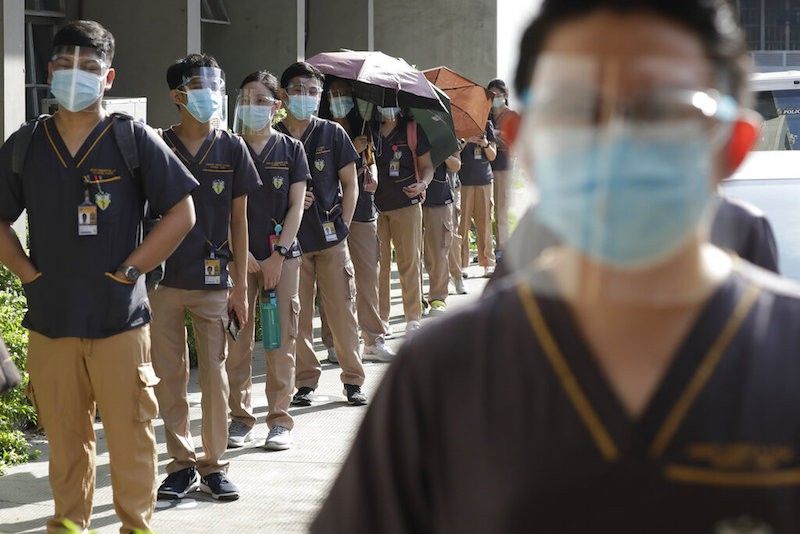 MANILA. Medical students wear face masks and face shields as they prepare to attend their face-to-face class in this photo taken in June 2021. (File)

THE Department of Health (DOH) on Sunday, August 1, 2021, reported over 100 deaths from coronavirus disease 2019 (Covid-19) nationwide for the fourth consecutive day, pushing the death toll in the country past 28,000.

The DOH also reported more than 8,000 new infections for the third day in a row, reverting the country’s two-week growth rate to positive territory and raising the cumulative count to nearly 1.6 million.

The increase coincided with the detection of Covid-19 cases caused by the highly contagious Delta variant in at least nine out of 17 regions. As of July 28, there have been 216 Delta cases, with eight deaths, nationwide.

Based on DOH case bulletins, new infections over a 14-day period had been on a downtrend in the past two months, declining by 7.5 percent on July 5 to 18 and by 13.6 percent on June 21 to July 4.

The seven-day moving average increased again to around 7,000 on Sunday, after three months of gradual decline from the peak on April 11 to 17.

New cases have exceeded 8,000 for the third consecutive day, bringing the cumulative case count to 1,597,689. Eleven duplicates were removed.

The daily positivity rate remained high at 14.9 percent, but testing output was slightly lower at 50,116 on July 30 as two laboratories were not operational and four others were unable to submit their testing data to the Covid-19 Document Repository System.

These included 75 cases that were previously tagged as recoveries but were validated to be deaths. As of August 1, the DOH has documented 28,016 Covid-19 deaths in the country. The case fatality rate swung back to 1.75 percent.

Nine recoveries were reclassified as active cases, raising the number of active cases in hospitals and isolation centers to 63,646, or 4.0 percent of the total count.