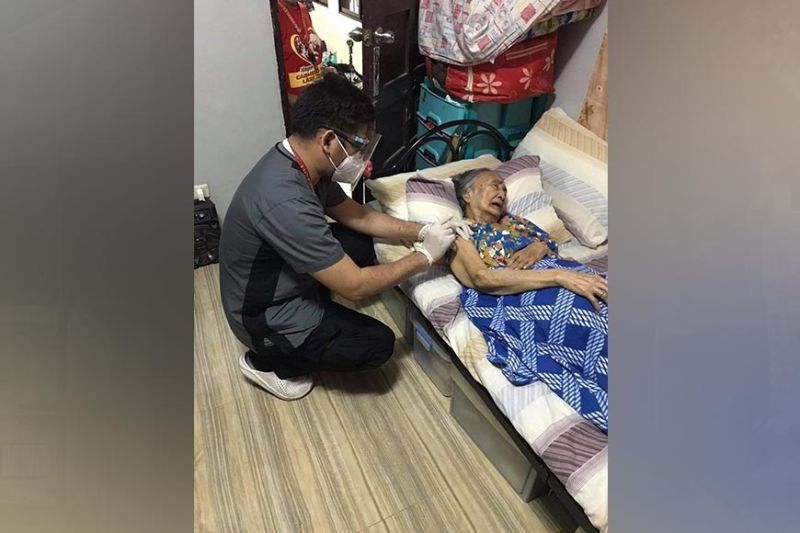 VACCINATION. Doctors and health workers of the Angeles City government continue the vaccination of bedridden senior citizens in the city. Aside from the house-to-house inoculation, P1,000 cash assistance and Vitamin C supplements were also given to the elderly. (Contributed photo)

AS LOCAL government units (LGUs) all over prepare for the possible spread of the Delta variant of the Covid-19, two leading cities in the Metro Clark area have ramped up vaccination and may reach completion by November 2021.

In Mabalacat City, Mayor Crisostomo Garbo announced in his State of the City Address that the target herd immunity may be attained by late October or early November.

“I am hopeful that Mabalacat City will reach the target herd immunity as long as the supply of vaccines keeps coming,” he said in his speech.

He said about 50,000 residents have been vaccinated already as of Tuesday last week. He also announced that he expects delivery this week of another 35,000 doses committed by Secretary Vince Dizon, deputy chief implementer against Covid-19.

The city has a population of 293,244 based on the 2020 Census of Population and Household of the Philippine Statistics Authority. Its target herd immunity level is pegged at 60 percent of the residents or a total of 174,000 Mabalaquenos. Its daily jabs now reach 3,000 per day.

Under its Covid 19 Response and Integrated System (Cris) Program, the city makes use of new modalities in the detection and treatment of the virus. It utilizes the cinemas at SM Clark and other city buildings as vaccination centers.

For his part, Mayor Carmelo Lazatin of Angeles City also expects completion by November for 80 percent of its 465,000 population.

At the Balitaan media forum of Capampangan In Media Inc. and Clark Development Corporation, Lazatin reported that about 75,000 and 35,000 residents have been given first and second jabs, respectively.

“Our average is now 5,000 jabs per day. I hope that the supply of vaccines would no longer be delayed so that we could complete our target herd immunity as soon as possible,” Lazatin said.

Both LGUs, contiguous to Clark and each other, have increased pace in their vaccinations since starting it in June. They have been sending mobile teams to target sectors in the barangays like indigents, transport workers and even those in factories.

For preparations against the Delta variant, Lazatin said that he has been in constant communication with Governor Dennis Pineda. He said that they have personally discussed ways to adopt control systems without adverse impacts on the local economy to help curb the spread of the virus.

The two mayors are members of the Metro Clark Advisory Council which has a standing resolution that ensures unimpeded movement of authorized persons outside of residence and goods in Pampanga and Tarlac.