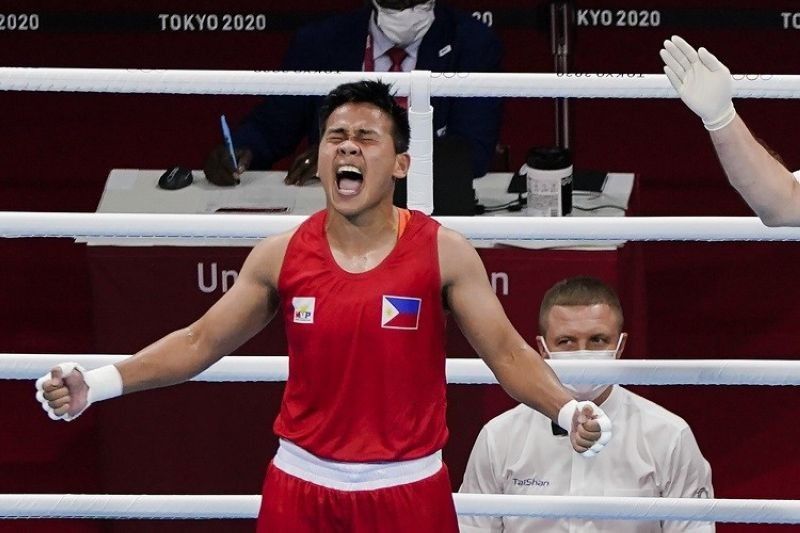 WITH the nation still rejoicing on Hidlyn Diaz’s historic feat in weightlifting, the Philippines is now on the brink of a potential second Olympic gold medal -- now in boxing after Davao del Sur-pride Nesthy Petecio triumphed over Italian Irma Testa on Saturday, July 31, 2021.

Petecio scored a convincing 4-1 victory in a women’s featherweight semifinal clash, assuring her at least a silver medal for the Philippines. She will face Sena Irie of host Japan on Tuesday at the Kokugikan arena.

With the win over Testa, the Davao-pride matched the silver medal of featherweight Anthony Villanueva during the 1964 Tokyo Olympics and light flyweight Mansueto “Onyok” Velasco in the 1996 Atlanta Olympics.

Meanwhile, another Zamboanga City-pride Eumir Felix Marcial is assured of another Olympic medal for the Philippines after knocking Arman Darchinyan of Armenia in the 2:11 minutes of the opening round of their fight Sunday.

Another Olympic medal hopeful Carlo Paalam also moved almost effortlessly to the quarterfinals of the men’s flyweight division with a 5-0 decision over Algeria’s Mohamed Flissi also over the weekend. He will face 2016 Rio de Janeiro Olympics gold medalist Shakhobidin Zoirov of Uzbekistan Tuesday.

In athletics, the 25-year-old Ernest John Obiena also advanced to the men’s pole vault finals after succeeded this third attempt of 5.75 meters following two failed tries. He clinched a seat in the 14-man final round where he is the only Asian to qualify.

However, Murcia-hailed golfer Juvic Pagunsan skied to a five-over-par 76 and fell out of medal contention in the men’s golf competition at the Kasumigaseki Country Club. The Negrense pride has an impressive start in the tournament when he was tied for fifth on opening day.