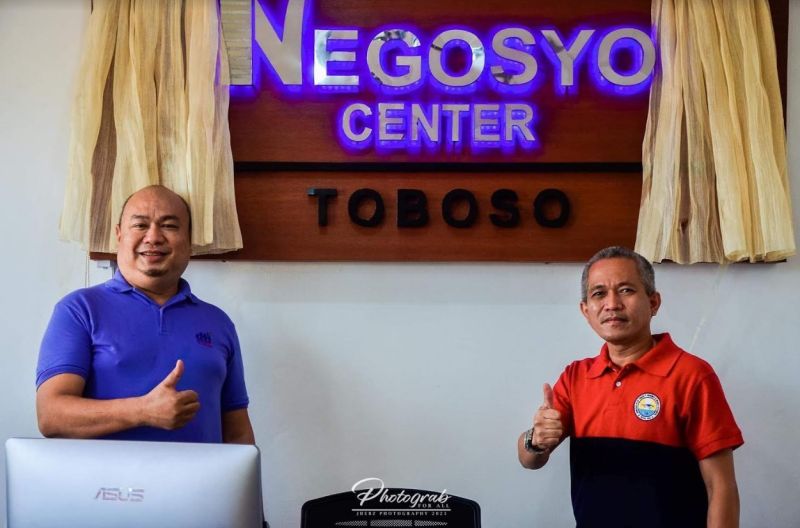 THE Department of Trade and Industry (DTI) is pushing for the creation of more enterprises in Toboso through the just-opened Negosyo Center in the northern Negros Occidental town.

DTI-Negros Occidental Small and Medium Enterprises Development Head Engiemar Tupas, who spoke at the unveiling rites on Thursday, July 29, 2021, said the facility in Toboso is the 24th Negosyo Center in the province.

Lodged at the new public market of the locality in Barangay Poblacion, it is also the first Negosyo Center to be opened this year following that in Talisay City, which was launched in 2018.

Tupas said it will bring the services of the DTI closer to the residents which will result in the creation of more enterprises in the locality.

"The Negosyo Center is mainly aimed at providing micro, small and medium enterprises (MSMEs) easy access to the programs and services of the agency like training," he said, adding that "if people are aware of the services, especially how to avail them, they will be encouraged to open up more businesses."

The Negosyo Center in Toboso is also positioned to become a convergence of the services of other government agencies which the DTI can assist in terms of bringing them closer to the public.

Tupas pointed out that the creation of enterprises and bridging the people to the programs of the government are important especially during this coronavirus disease (Covid-19) pandemic.

Amid restrictions on the movement of people due to the pandemic, there is a need to further make the government services closer to them, he said.

"Kun indi sila kakadto sa aton, kita ang mapalapit sa ila [if they cannot go to us, we will be the one to reach them]fg," the official stressed.

It provides MSMEs the ease of doing business, and facilitates access to grants and other forms of financial assistance, and shared service facilities (SSF), among others.

In Toboso, most of about 3,000 micro and small enterprises are expected to benefit from the business name registration service of the center.

They no longer need to apply for business name registration in Bacolod City or nearby cities like Escalante and San Carlos, which already have their respective Negosyo Centers.

In terms of product development, Tupas said they are looking at the town's agro-fishery as one of the priority sectors.

Tupas said the locality is rich in fishery products, thus, residents can be trained on value-adding like dried fish making.

Handicrafts is another potential sector there, he added.

Like other Negosyo Centers in the province, the local government unit (LGU) has provided for the area while the DTI took charge of the signage, furniture and other equipment, among others.

Aside from Toboso, the agency is upbeat to open nine more Negosyo Centers in the province in August this year.

"By that time, all of our 13 cities and 19 municipalities will already have their respective Negosyo Centers," the official said, adding that "it would mean creation of more enterprises in the province."

In 2016, the eighth Negosyo Center in the province was unveiled in Hinigaran town.

Others that opened that year are those in the cities of Bacolod, San Carlos, Victorias, and La Carlota.

The first three facilities opened in 2018 were those in Binalbagan, Cadiz City and Escalante City.

In the same year, Negosyo Centers were launched in towns of Pontevedra and San Enrique, and cities of Silay and Talisay.

Meanwhile, also present during the launching of Negosyo Center in Toboso were town officials led by Mayor Richard Jaojoco.