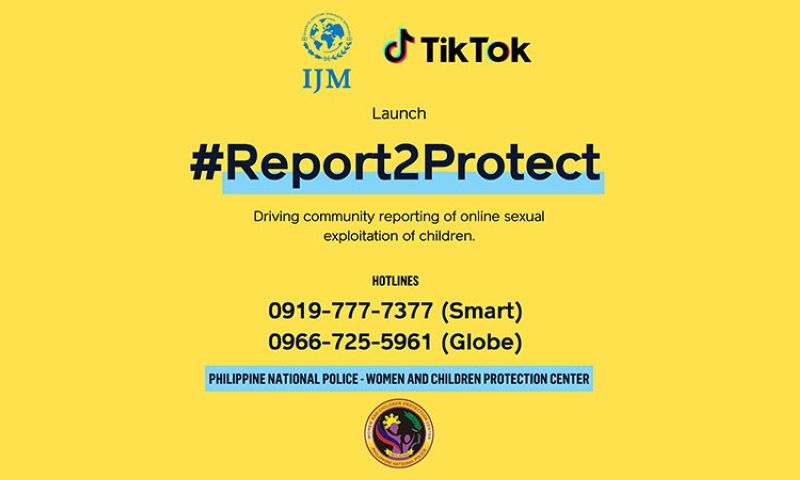 INTERNATIONAL Justice Mission (IJM) partnered with TikTok to ramp up community awareness and reporting of the trafficking of minors to create child sexual exploitation materials.

Launched Monday, August 2, the #Report2Protect campaign encourages timely reporting of the crime to authorities, using the hotlines from the Philippine National Police-Women and Children Protection Center (PNP-WCPC): 0919-777-7377 (Smart) and 0966-725-5961 (Globe).

The campaign features educational and compelling videos from TikTok creators who have huge following on the platform. The videos display WCPC’s hotline numbers and urge anyone who has information of this trafficking crime happening in their community to report.

“The Philippine government has made incredible progress in the fight to end online sexual exploitation of children, and this campaign seeks to continue the momentum,” said lawyer Samson Inocencio Jr., regional vice president of IJM Global Programs Against Online Sexual Exploitation of Children. “We at IJM are pleased to team up with TikTok to educate more Filipinos, especially the youth, about this threat and empower members of the community to contact authorities when they know a child is being sexually abused and exploited by traffickers who want easy money from online sex offenders. This crime inflicts deep trauma on child victims. Timely intervention is critical.”

Kristoffer Rada, TikTok head for Public Policy, said: “At TikTok, the safety of our users, especially the younger online community, has always been our top priority. We are proud to announce today our partnership with IJM to address the worrying issues of online child abuse. Online sexual exploitation of children is a serious problem in the country and the impact on its victims is devastating. This partnership reiterates our commitment to combating this serious issue, and the opportunity for TikTok to strengthen our commitment in promoting a positive and safer online environment for children; keeping the platform a fun, creative and an inspiring place for creating and consuming content for everyone.”

“This campaign not only encourages the community to report incidences of online sexual exploitation of children; it also sends a strong warning to traffickers that there is growing vigilance against this crime,” said Police Colonel Sheila Portento, chief of the WCPC Anti-Trafficking in Persons Division. “Now, more than ever, it’s harder to get away from this trafficking crime. The long arm of the law will always catch up with anyone who dares to sexually exploit our precious children.”

Based on IJM-supported operations since 2011, Philippine authorities have rescued at least 828 victims, arrested 293 suspected perpetrators, and convicted 115 of them. In February 2019, the PNP and National Bureau of Investigation founded the Philippine Internet Crimes Against Children Center (Picacc) together with the Australian Federal Police, UK National Crime Agency and IJM.

Picacc has become a model for enhanced global law enforcement response against the trafficking of children for online sexual exploitation. This year, Picacc welcomed a new member, the National Police of the Netherlands.

Support the campaign by posting or sharing videos bearing the WCPC hotline numbers under the hashtag #Report2Protect and by following IJM Philippines on TikTok (@ijmph). (PR)