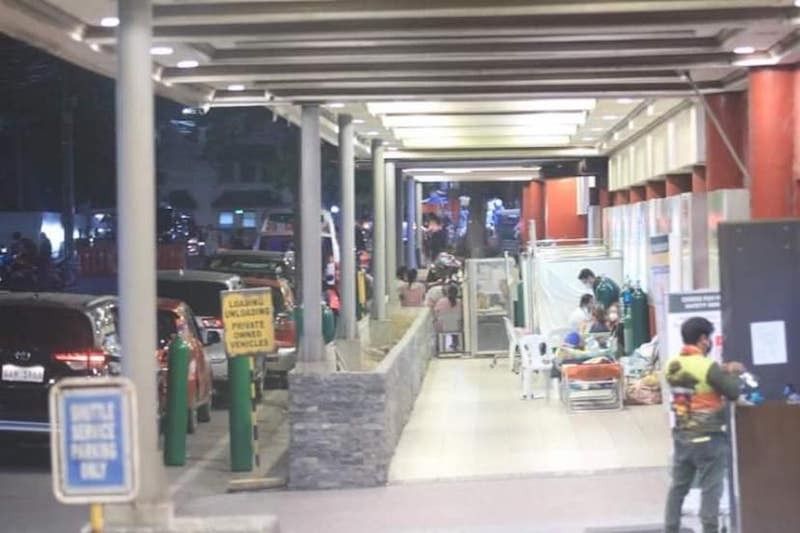 MANILA. Some of the patients seeking admission are given oxygen while queuing for their turn to be admitted to the emergency room of a major hospital in Cebu City on August 1, 2021. (SunStar Cebu)

THE reported shortage of ward and intensive care unit (ICU) beds for coronavirus disease 2019 (Covid-19) patients in the highly urbanized cities of Cebu, Mandaue and Lapu-Lapu is irrelevant to the reclassification of Cebu Province’s quarantine level, an official of the Department of Health (DOH) said Monday, August 2, 2021.

She said the de-escalation of community quarantine restrictions in Cebu Province did not negate the recommendation of the DOH data analytics team as local officials have vowed to implement granular lockdowns in areas with rising Covid-19 cases.

The recommendation was adopted by the Inter-Agency Task Force (IATF) for the Management of Emerging Infectious Diseases and included in its Resolution 130-A, which was approved by President Rodrigo Duterte.

Local government units (LGU), however, may appeal for reclassification with the Department of the Interior and Local Government.

In assessing quarantine classifications, the DOH looks at the healthcare utilization rate, daily attack rate and two-week growth rate, among others.

Under IATF Resolution 130-D, Cebu Province’s appeal for a downgrade was granted, provided that granular lockdowns would be implemented. Cebu Province is now under general community quarantine (GCQ) with heightened restrictions until August 15.

“There are granular lockdowns that are going to happen where they implement MECQ in identified places,” Vergeire said.

The cities of Cebu, Mandaue and Lapu-Lapu, however, remain under MECQ until August 15, with some private hospitals reeling under the deluge of patients seeking hospitalization.

Based on the DOH Covid-19 tracker, however, there are still available isolation, ward and ICU beds in hospitals in Cebu City and Mandaue City.

The waiting list at a Level 3 hospital, however, reached 33 on Sunday evening, according to Cebu City Councilor Dave Tumulak.

One of these hospitals had a waiting list of more than 20 patients as of August 1, a nurse working at the facility said.

In Lapu-Lapu City, the two ICU beds and 31 ward beds were all occupied while there were still five available out of 106 isolation beds.