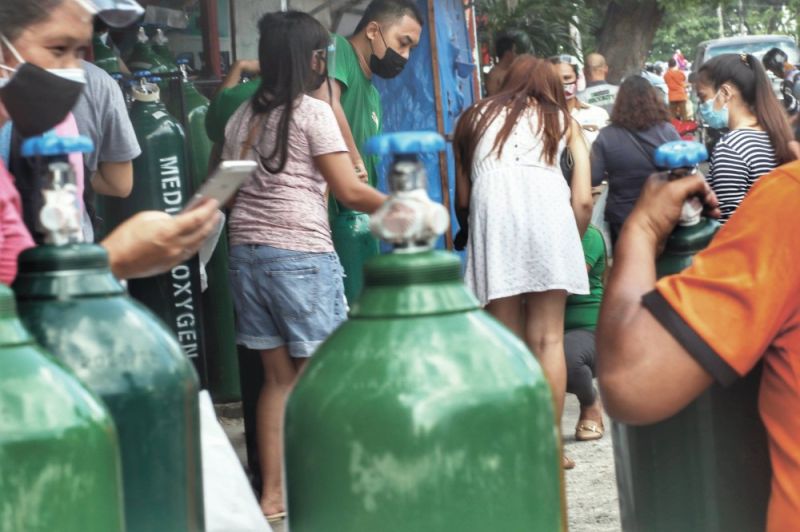 The buying spree happened a day after images of patients waiting inside their cars and outside Chong Hua Hospital, a neighbor of VSMMC, spread on social media.

An employee of SJ Sanjo Pharmacy told Superbalita Cebu that the long line started around 7 a.m. More than 70 oxygen tanks were sold in three hours as some of the customers bought several tanks.

The customers, some of whom came from other parts of Cebu, were told to come back Tuesday, Aug. 3.

Cebu City Councilor David Tumulak dispatched a team to help in hauling oxygen tanks to the customers’ cars or taxis flagged down by customers who do not have private vehicles so as not to cause traffic along B. Rodriguez St.

He coordinated with the Cebu City Transportation Office not to apprehend motorists who stopped by the pharmacy to buy oxygen tanks.

Meanwhile, Cebu Gov. Gwendolyn Garcia promised to add 50 oxygen tanks for each of the four provincial hospitals in Bogo City, Danao City, Carcar City and Balamban to ensure that the supply of oxygen for patients who needed it does not run out.

The governor said the supply of oxygen in the provincial hospitals is still sufficient. The hospitals’ chiefs were told to buy oxygen tanks if needed because they have funds that are given on a monthly basis.

Garcia will also meet with oxygen tank suppliers on Tuesday to discuss an arrangement for the provincial hospitals.

She has nothing against people buying oxygen tanks, but hospitals must be prioritized first.

“We should not also prohibit others who would wish to equip themselves in their own residences because it decongests the hospitals. Tinud-on na lang nato nig istorya (Let me be frank about it),” (GPL, ANV / KAL)