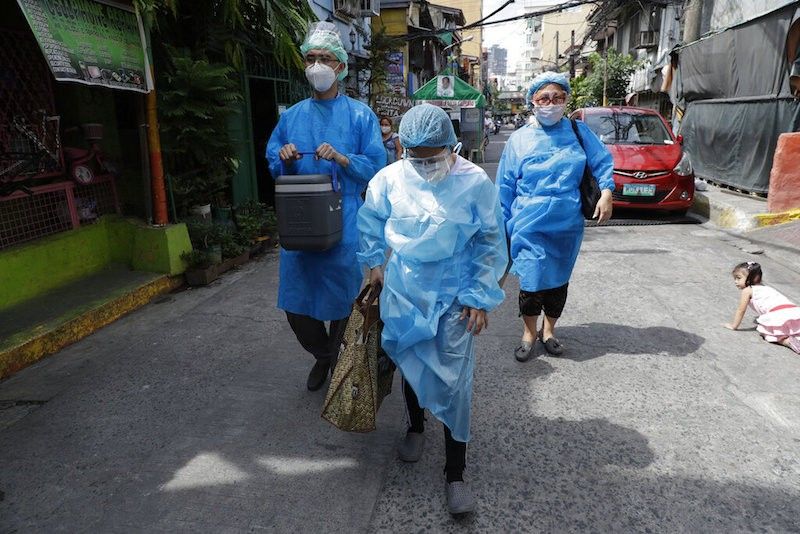 MANILA. In this photo taken in May 2021, health workers in protective suits walk to the homes of residents who are not able to go to vaccination centers in Manila. (File)

AFTER four consecutive days of coronavirus disease 2019 (Covid-19) cases exceeding 8,000, new infections fell below 7,000 on Tuesday, August 3, 2021, as nine laboratories failed to submit their testing output and one laboratory was non-operational.

In its case bulletin, the Department of Health (DOH) reported 6,879 new cases, 48 additional deaths and 6,337 recoveries.

The impact of the Delta variant of Sars-CoV-2 is now observed nationally and the entire country is now classified as moderate risk as half of provinces, highly urbanized cities and independent component cities are showing an uptick in cases, healthcare utilization rates (HCUR) and intensive care unit utilization rates (ICUR), according to DOH Undersecretary Maria Rosario Vergeire.

At a granular level, a total of 36 provinces, highly urbanized cities and independent component cities have been flagged as moderate risk with a low to moderate risk health capacity.

Another 21 areas have been flagged due to moderate to high risk case classification, and high to critical risk health care capacity.

At the national level, deaths are declining, but Vergeire said they have observed an evident increase in deaths in Central Luzon and Central Visayas.

NCR, or Metro Manila, posted a two-week growth rate (TWGR) of 85 percent in the recent two weeks compared to the previous two weeks, followed by Central Visayas with a TWGR of 71 percent, Northern Mindanao with a 64 percent growth, Cagayan Valley (48 percent), Ilocos (34 percent) and Cordillera (3 percent).

Western Visayas also has a high attack rate of 7.17 per 100,000 population but new cases are slowing down as indicated by a negative TWGR.

In terms of ICUR, Ilocos and Cagayan Valley are considered high risk with HCUR of 72.78 percent and 72.66 percent, respectively.

Central Visayas, Cordillera and Northern Mindanao are at moderate risk with ICUR of 63.41 percent, 64.37 percent and 67.9 percent, respectively.

The NCR, meanwhile, has an ICUR of 54.8 percent, which is still low risk.

All six regions are still in the safe zone in terms of occupancy of ward and isolation beds, as their HCUR are below 60 percent.

The DOH said it removed 100 duplicates, including 98 recoveries, from the case count.

Testing output on August 1 was low at only 37,302 with a positivity rate of 17.5 percent, the highest in more than three months.

The case fatality rate remained at 1.75 percent. The additional deaths included 18 cases that were initially tagged as recoveries.

There were also 12 recoveries that were reclassified as active cases.

Among the regions, the National Capital Region (NCR) had the highest number of new cases at 2,074 followed by Calabarzon with 1,476, Central Visayas with 873, Central Luzon with 836 and Western Visayas with 573.

The University of the Philippines Philippine Genome Center has detected 216 Delta variant (B.1.617.2) cases. Nine had died while 17 remained active cases as of Tuesday.

The Delta variant has been described as the fastest and fittest variant of Sars-CoV-2. It is more transmissible, with an infectious person infecting up to eight others compared to the Alpha variant which can infect four or five people, and the original strain which can infect just one person.

Studies have also shown that the Delta variant is causing an increase in hospitalizations and deaths. In some countries, epidemic curves have risen almost vertically because of this variant. (Marites Villamor-Ilano / SunStar Philippines)