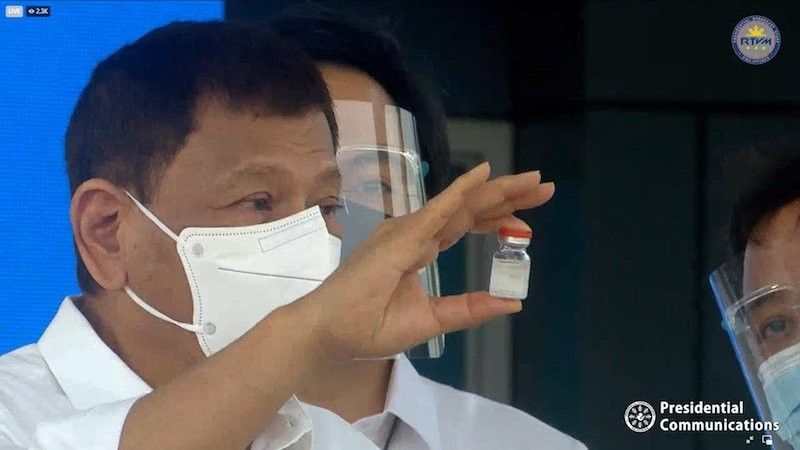 MANILA. President Rodrigo Duterte holds a vial of Moderna mRNA vaccine against Covid-19 as he welcomes the arrival of vaccines donated by the US through the Covax Facility on August 3, 2021. (From state-controlled PTV)

THE Philippines on Tuesday, August 3, 2021, received another shipment of Moderna mRNA vaccines donated by the United States through the Covax Facility.

The 3,000,060 doses that arrived Tuesday make up the second tranche of donation from the US, which earlier sent 3,240,850 doses of the single-dose Janssen viral vector vaccine.

With this new shipment, Department of Health (DOH) Secretary Francisco Duque III said the Philippines has received 6,240,910 doses of vaccine from the US through Covax.

President Rodrigo Duterte, in his speech during the arrival ceremony, said the government will try to entice those who do not want to be vaccinated with the vaccines given by the US.

He said the “cooperation between the Philippines and the US in overcoming the pandemic highlights the deep friendship between the two countries.”

“Now, ensuring that these vaccines are brought to our people safely is a tedious and difficult process,” he said.

Duterte said the government will comply with the US government’s sentiment that the vaccines it donated go first to the poor.

“Rest assured, everybody will follow that directive. Let us beat Covid together,” he said.

US Embassy Charge d’Affaires John Law, for his part, noted that the US, as the biggest contributor to Covax, has facilitated the delivery of more than 13 million doses of Covid-19 vaccines to the Philippines.

He stressed that the vaccines protect the most vulnerable populations, including the elderly, immunocompromised and medical workers.

“Recent Covid outbreaks in the region remind us all this pandemic is not yet over. But the science is clear - the best way to stay healthy, to keep your loved ones safe and to bring this pandemic to an end is to get vaccinated,” Law said.

The Moderna vaccine uses the mRNA technology, similar to Pfizer. It is also given in two doses.

As of August 3, the Philippines has received 37,275,800 doses of vaccines, including the 3.2 million doses of the single-dose Janssen (Johnson & Johnson) vaccine.

These vaccines should protect around 20 million Filipinos.

All vaccines, except Janssen, are given in two doses.

As of August 1, Secretary Carlito Galvez Jr. reported that first dose inoculations in the country have reached 11,747,581.

The government has also met its target of 500,000 shots a day as an average of 523,018 doses were administered in the last seven days. (Marites Villamor-Ilano / SunStar Philippines)