La Castellana police get boost through P3M in vehicles, lot 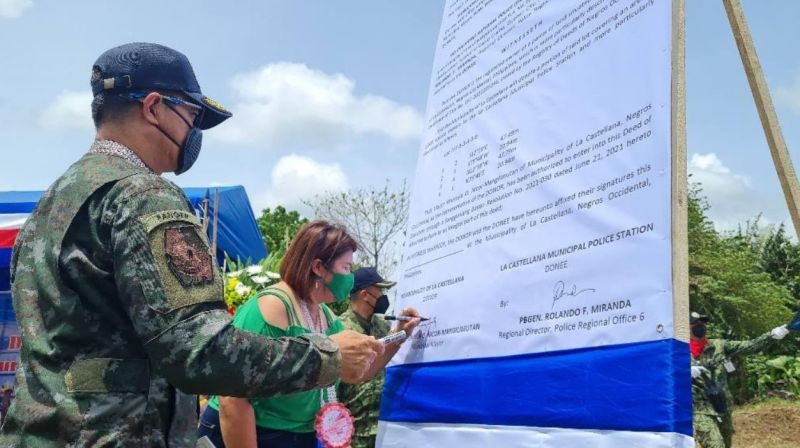 THE Municipal Government of La Castellana has turned over at least P3 million worth of vehicles to the local police force and donated a lot for the establishment of the latter's new police station.

Mayor Rhumyla-Nicor Mangilimutan, who spoke at the turnover rites and signing of the Deed of Donation at the town's Barangay Robles Tuesday, August 3, said the support extended by the local government is seen to boost the operation of the police station especially in maintaining peace and order in the locality.

Rhumyla-Nicor Mangilimutan said the Municipal Government bought one brand new mobile patrol and repaired two other vehicles for the police station's use.

These are on top of the three motorcycles intended for the use of its warrant, investigation and intelligence sections.

"As a policewoman myself, I have seen how small their operating expenses from the Philippine National Police (PNP) is," she said, adding that "that is why I encourage my fellow government officials that if we want to maintain a peaceful locality, we have to help our police and other law enforcement agencies."

The 1,000-square-meter lot in Barangay Robles, on the other hand, was actually a donated property of the Gonzaga family.

The Municipal Government, however, had to process the lot first before transferring it to the PNP through a Deed of Donation.

“It should be under the Municipal Government so we could donate it to the police station,” the mayor pointed out.

She said the new police station will soon be part of the town's oval to be developed as a social activity center along with the Bureau of Fire Protection and Disaster Risk Reduction and Management Office command center, among others.

Nicor-Mangilimutan said the local government is putting premium to peace and order development as it plays a vital role in further developing other industries like tourism.

"During my administration for five years now, we have not encountered major criminality here," she said, adding that "far from its previous image where people seemed afraid to visit the town, La Castellana is now one of the major tourist attractions in Negros Occidental"

For his part, Police Regional Office (PRO)-Western Visayas Director Brigadier General Rolando Miranda, who was also present at the activity, said they will start processing the request for funding from the PNP Headquarters for the construction of the new police station.

As he thanked the Municipal Government for actively playing its shared responsibility toward peace and order, Miranda assured that the PRO-Western Visayas will do its best to also help the local police.

"We will lobby for funds for the establishment of the new building for our police here," he added.

The regional police director admitted that they cannot perform their duties well without the support of its partners in bringing progress to the locality, especially in maintaining peace and order.