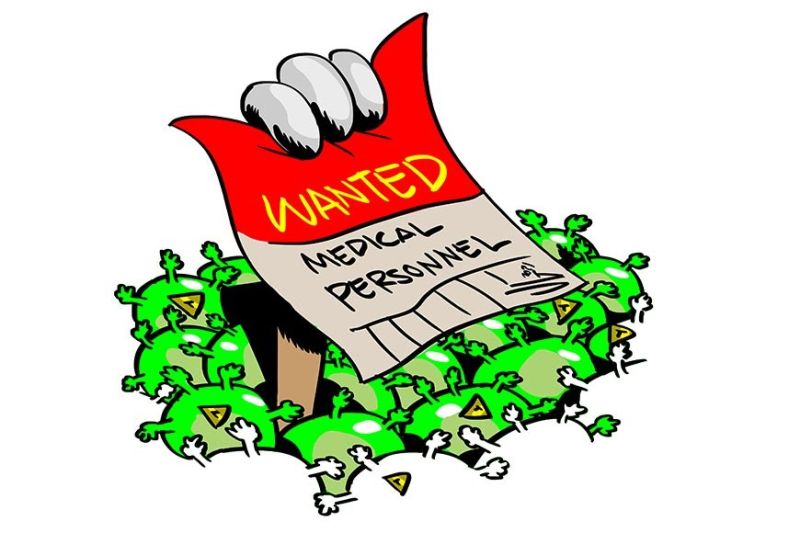 THIS is anyway a fight, not to mention our recent medal catch in Tokyo, so we’ll use boxing parlance. Think of the Delta season as the middle rounds of a rough fight. Much energy had been spent, we were clobbered blue, style combinations have been thrown, we’ve ducked for cover, bobbed and weaved, caught our breath and tried to recover an easy pace. Yet, as the bell rings, another flurry of blows beats us like hell. It’s an unforgiving enemy up front, and the only bell that will ever save us is, yes, vaccination.

Cebu City’s Emergency Operations Center reports as of Aug. 3, 2021, that the top four places where transmissions are more common are: workplace (71); supermarkets (27); public markets (10); and from hospital medical frontliners (9).

We use the word “flurry” because over a year now in this pandemic, it seems that progress appears just as haphazard as in the early months.

For instance, with medical frontliners. The first blow came when an undisclosed number of nurses at the Cebu City Medical Center (CCMC) resigned; severely delayed pay was an insult both to their profession and their humanity, no amount of red tape baloney was simply acceptable. While there was no official word on its impact on hospital services then, the problem revealed itself in another way—shortage of nurses. At a time of great need.

Department of Health (DOH) 7 Director Jaime Bernadas now admits that the DOH is having a hard time hiring nurses—it opened 50 slots, but only eight responded. “Please respond at this time...we need you...this is what we are trying to prepare for,” the regional director pleads. We always wonder how the good doctor could, for one moment, assure that our health care system is ready and that we’re in control and in the next, sound like a lonely man. Yes, doctor, we have enough beds.

As though rubbing salt on a festering gash, the Cebu City EOC reported that at least 132 frontliners in Cebu City in 31 hospitals, laboratories and medical facilities caught the virus. EOC deputy chief implementer Joel Garganera said they are now in drill isolation and their close contacts traced.

That number blots out entire columns of functioning frontliners responding to the crisis, effectively stripping care capacities. “That’s a big dent to our medical force,” said Garganera. And this is a problem that is no less true in the cities of Mandaue, Lapu-Lapu and Talisay, including the towns in the Cebu Province.

There is no saying whether or not the quarantine protocols have been followed to the letter in our corner of the world, but while we’re at it, the moral soundbite for our officials to utter must only be that which pushes for vaccination. That is our only exit path out of this pandemic, and towards a reassuring return to a breezier economic activity, devoid of fear and uncertainty.

A sector of officials are still at it despite last year’s takeaways that populism has been this pandemic’s uglier twin. The wiser among us can better take the more humane responsibility of protecting ourselves and our loved ones both from irresponsible politicians and the virus.