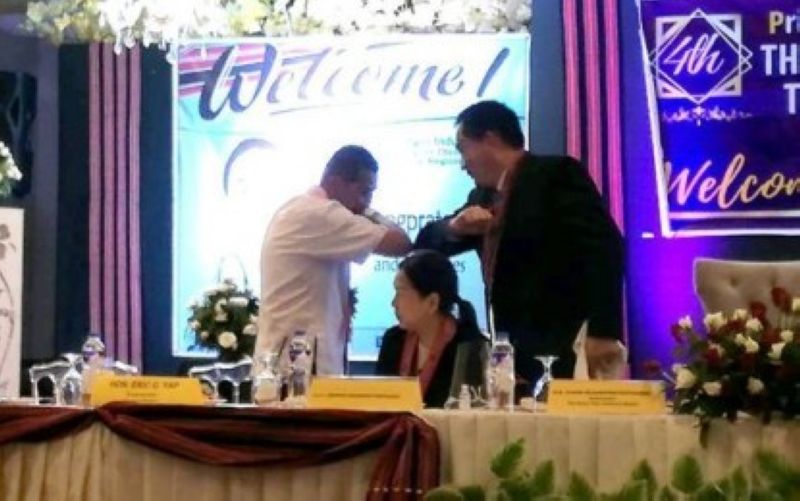 THAI PRINCESS RECOGNITION. Thailand Ambassador to the Philippines Vasin Ruangprateepsaeng (right), elbow bumps with Marcelo Otinguey (left), one of the 11 awardees of the 4th Princess Maha Chakri Award (PMCA) held at the Thailand Embassy on July 29, 2021. The PMCA is Thailand's recognition to honor Princess Maha Chakri Sirindhorn, the second daughter of King Bhumibol Adulyadej and younger sister of King Vajiralongkorn for her wisdom and lifelong contribution to education. (PNA photo by Liza Agoot)

BAGUIO CITY – Inadequacy of resources is no reason to stop helping improve the quality of education especially in a far-flung community because it can be solved thru innovation and ingenuity, according to a public school teacher in a fourth class municipality of Benguet who is an awardee of the 2021 Princess Maha Chakri Awards (PMCA).

Marcelo Otinguey, head teacher at Governor Bado Dangwa Agro-Industrial School (GBDAIS) in Kapangan, Benguet, is one of the 11 awardees of the PMCA together with other recipients from Brunei, Cambodia, Indonesia, Lao PDR, Malaysia, Myanmar, Singapore, Thailand, Vietnam, and East Timor. In an interview over the weekend, he said 25 years of teaching in several far-flung public high schools in the province made him see the value of linkages where the programs and projects to improve the lives of the people in the community can be pursued.

Princess Maha Chakri Sirindhorn is the second daughter of King Bhumibol Adulyadej and the younger sister of King Vajiralongkorn of Thailand.

His efforts made the International Cooperation Bureau of the Department of Education (DepEd) submit Otinguey’s credentials to the Ministry of Education of Thailand for the 4th PMCA.

In his July 29 message during a three-day visit here, Thailand Ambassador to the Philippines Vasin Ruangprateepsaeng said his first official visit to the Cordillera is to meet Otinguey in person, the only awardee from the Philippines.

Otinguey received the award on July 29 at the Thailand Embassy following the announcement of winners last May. The Ambassador was originally scheduled to meet with Otinguey at his school in Kapangan but the inclement weather moved the meeting to this city instead.

He said the awarding was started by the Princes Maja Chakri Foundation in 2015 to commemorate the princess’ 60th birthday by looking for exceptional teachers in Southeast Asia whose achievements have resulted in a significant impact on the students' life and a better education system.

The recognition administered by the Princess Maja Chakri Foundation is in partnership with the Ministry of Education of Thailand.

Otinguey sees his being a teacher as service to his fellowmen, aside from providing livelihood, the reason he pursues whatever programs he deems would contribute to the good of his people in Benguet, his birthplace and hometown.

He said his continuing program identifies the need of the school and the community, find solutions and make linkages such as partnering with groups, foundations, organizations, and agencies in government.

“With challenges in the profession, partnership and linkage are very important because there are others who can and will fill up the gaps of insufficient resources,” he said.

“I keep on continuing to be creative because I want to be productive,” he added.

Otinguey said the cash award he received will go a long way for the many projects he will continue to pursue.

He said many teachers are also creative and will do more for their students.

Many teachers like him also face problems with different strategies and interventions. On his part, he said that he documents his programs and shows these to fellow teachers so they can adopt what applies to them.

Dr. Estella Cariño, DepEd-Cordillera Administrative Region (CAR) director, said she is adopting Otinguey's program as they recognize the teachers and DepEd personnel for their achievements, awards, and other excellent performance.

She said they are hoping that other teachers, not only in the Cordillera, will learn from the experience of Otinguey who does a holistic approach in addressing the needs of the school and the community through linkage with those willing to help. (PNA)