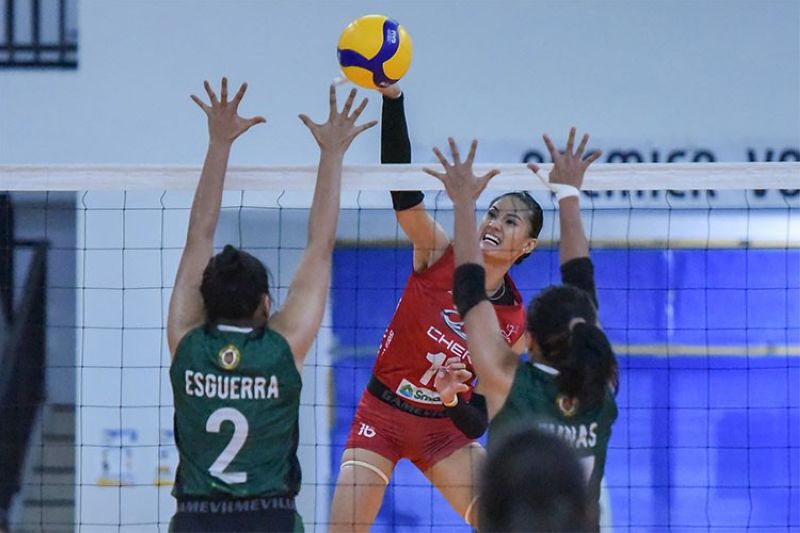 MANILA. Dindin Manabat uncorks a power hit against Army’s Esguerra and Nunag that more than underscored the Chery Tiggo Crossovers’ determined drive to the semis. (PVL)

THE Chery Tiggo Crossovers easily took care of the Black Mamba Army, 25-16, 25-16, 25-21, to guarantee itself of at least a playoff for one of the semifinal berths in the Premier Volleyball League Open Conference at the PCV Socio-Civic Cultural Center in Bacarra on Wednesday, August 4.

Dindin Manabat and sister Jaja Santiago led the Crossovers’ charge and claim the straight sets victory in just an hour and seven minutes. The victory was Chery Tiggo’s third in a row.

With a 6-2 win-loss card, Chery Tiggo moved up to solo third with frontrunners Choco Mucho (6-0) and Creamline (6-1) battling for the solo lead at press time and Petro Gazz (5-2) and Sta. Lucia (5-3) slugging it out in a key duel on Thursday heading to the final stretch of the single round eliminations.

“I’m happy more than thankful to the players (for performing),” said Chery Tiggo coach Aaron Velez. “We just have to continue scouting the other teams. We also have to invest in our physical conditioning and mental preparation.”

“The mere fact that we can still play, we just have to make use of it and be thankful the PVL is still here,” added Velez.

Manabat came up with an 18-hit outing, including 16 attacks, while Santiago produced 12 kills for a 15-point afternoon for the Crossovers, who dominated their spiking duel, 46-31 while pouncing on their rivals’ sloppy service reception to fire eight aces.