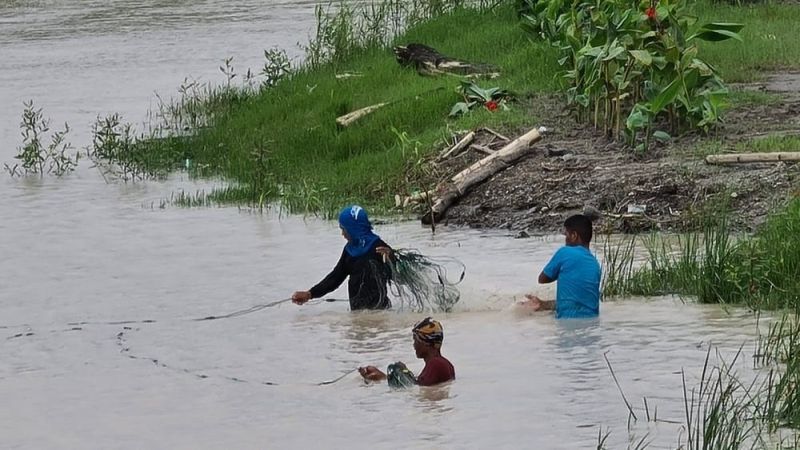 FISHING. Residents in Minalin town put up nets to catch fish that escaped from flooded fish pens in the area. (Chris Navarro)

A FISHERMEN’S organization has asked the government to issue clear guidelines on the delivery of agricultural and fishery products following the implementation of the two-week enhanced community quarantine (ECQ) in Metro Manila.

The fishers’ group urged the Department of Agriculture (DA) to closely coordinate with the Inter-Agency Task Force for the Management of Emerging Infectious Diseases (IATF) to exempt agri-fishery products from strict border control points.

“In the past, border restrictions impeded the movement of agri-fishery products from one place to another. It primarily affected small fishers and farmers who were unable to transport their produce to major fish ports and markets in central towns. Moreover, this strict measure fuels inflation of basic food products that are detrimental to poor consumers who are already battered by economic devastation caused by the pandemic,” said Fernando Hicap, Pamalakaya national chairperson.

“Deliveries of food products should be unhampered or it will lead to another crisis after another. Apart from medical response, it should also be considered that food is essential in time of a public health crisis. Strengthening agricultural and fisheries production can assure steady and affordable supply of foods in the market,” he added.

Pamalakaya reiterated its call for the immediate passage of the House Bill 9192, seeking P15,000 subsidy for fishers and farmers intended for production and livelihood expenses.

“Being the country’s food security frontliners, it is by right that we demand government support in a form of production subsidy and livelihood aid to pump-prime the production and keep up with the ever-increasing demand of foods by the distressed population,” said Hicap.