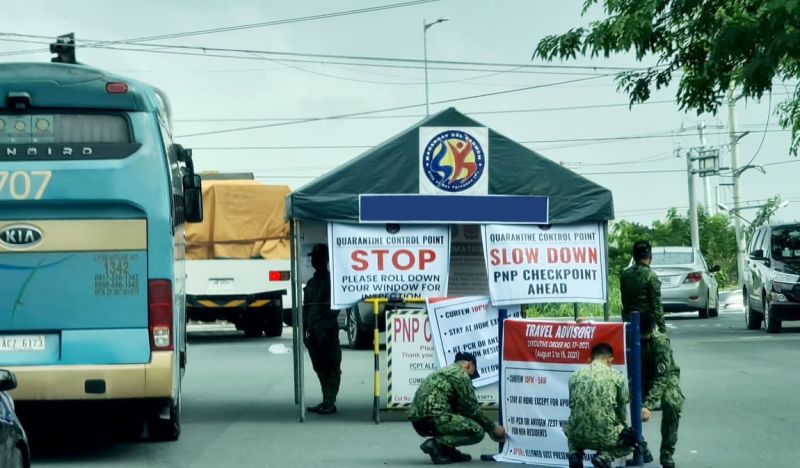 QUARANTINE CONTROL POINT. Policemen put up reminders for motorists passing the NLEX San Fernando exit as non-residents are required to present a negative RT-PCR test result before entering cities and towns in Pampanga following strict travel advisory from August to 2 to 15, in compliance of EO 17 issued by Governor Dennis Pineda for additional safety protocols under MGCQ to prevent the spread of Covid-19. (Chris Navarro)

TWELVE provincial checkpoints have been put up along Pampanga’s boarders with neighboring provinces in compliance with Governor Dennis Pineda’s Executive Order 17, which took effect on Monday, August 2.

As per the order, non-Pampanga residents are prevented from entering Pampanga unless they present negative results of RT-PCR or antigen tests done 48 hours before they enter Pampanga.

Local officials are expecting an influx of non-residents as the National Capital Region (NCR) has been declared under enhanced community quarantine (ECQ) beginning August 6.

Police and local officials have been seen manning checkpoints as early as Sunday, August 1.

The provincial border checkpoints are along the towns near Bulacan, Tarlac and Bataan.

Barangay checkpoints in between town borders and major thoroughfares have also been put up by barangay officials as of Wednesday, August 4.

The Executive Order 17 mandates the return of border and barangay checkpoints in Pampanga in a bid to stem the spread of the coronavirus in Pampanga, particularly the Delta variant.

The variant was detected through genome testing on three returning overseas Filipinos. One was reclassified to Manila.

A province-wide curfew is also in effect imposed from 10 p.m. to 5 a.m., with the governor exempting workers and business people.