Petecio wants to enjoy her break 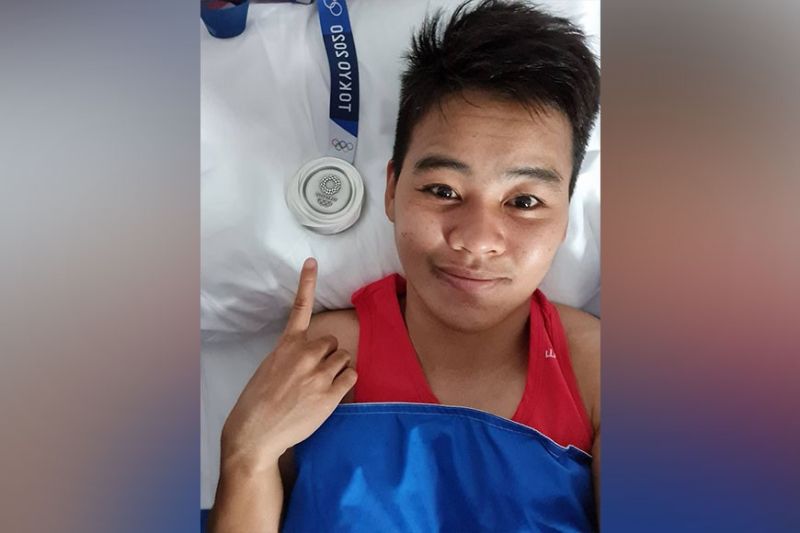 TOKYO 2020 Olympics women's boxing silver medalist Nesthy Alcayde Petecio is taking a needed break when she returns to the country.

She bared this in a press conference arranged by the Philippine Olympic Committee (POC) and streamed live via its Facebook page Wednesday, August 4, 2021, after waking up with her silver medal beside her on the bed.

"Sobrang saya at blessed ko po, tinabi ko po talaga sya para mas ma-feel ko po at mag-sink in po talaga sa akin na nag-silver medal po ako sa Olympics kaya sinadya kong tinabi taga-galaw ko maramdaman ko sya na andito pa (I am so happy and blessed, I had my medal beside me when I slept so I can feel and for it to sink it that I really won a silver medal in the Olympics. I intended to put it beside me so that whenever I move I can feel that it's still here)," the 29-year-old Petecio said.

The Sta. Cruz, Davao del Sur native also said that resuming training is not yet in her mind at the moment.

She said they would immediately resume training whenever their coaches or bosses tell them to.

Of the pledged cash incentives that currently hit P20 million, real properties, and other token gifts for her, Petecio was quick to reply that she wanted to be certain that it all reach her as she does not want to experience what Atlanta 1996 Olympics silver medalist Mansueto "Onyok" Velasco had gone through. The latter claimed he has not received all rewards promised to him including a P2.5 million cash pledge from the Congress.

"Lahat yun para sa pamilya ko. Sisiguruhin ko po muna. Planado napo, may nakalaan na po lahat yun. Sisiguraduhin ko po baka iiyak po kami lahat (It's all for my family. I'll make sure of it first. It's planned, it has already been allocated. I just have to make sure otherwise we will all just cry)," she said.

She will also receive a P10-million fully-furnished residential condominium unit at One Lakeshore Drive inside the 11.2-hectare Davao Park District in Lanang, Davao City from Suntrust Properties Inc. and a P2.5 million house and lot in Caliya, Candelaria from Ovialand Inc.

Philippine Airlines will also made her the second Forever Flyer with free 60,000 Mabuhay Miles per year and unlimited Air Asia flights for five years.