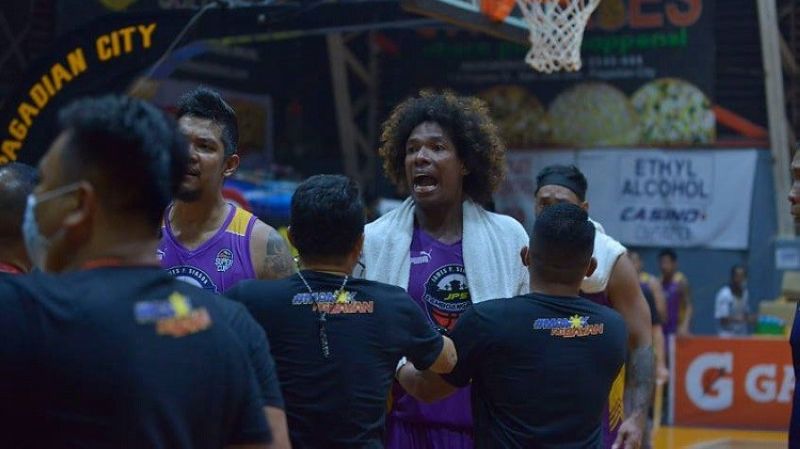 PAGADIAN. Players of JPS Zamboanga City are separated from the game officials after their Game One loss to Roxas in the VisMin Cup semifinals. (Chooks-to-Go Pilipinas)

THE JPS Zamboanga City came away from their 91-84 Game One loss to the Roxas Vanguards feeling upset and decided to make their frustrations known to the referees after the match.

Not long after the final buzzer sounded on the Roxas win, a commotion not caught in camera ensued as JPS players Gabby Espinas and Kyle Neypes among others rushed to the referees, arguing some missed and bad calls.

Espinas was caught in the broadcast pointing a finger to a referee while Neypes was also seen doing the “stirring the pot” gesture, apparently implying something nefarious with the officiating. Fortunately, cooler heads prevailed as the other referees in attendance who did not work the game were able to pacify the situation.

Overall, it was a disappointing ending for JPS, which led by as much as 18 points in the game before Roxas rallied late to tie the match at 75-all and send it to overtime. Roxas eventually dominated the extra session to take the series-opening win.

The Vanguards were the more aggressive squad in the second half, as showed at the time where Zamboanga went into penalty per quarter.

While JPS reached the penalty mark late in the first and second cantos, they reached that mark early in the third and fourth periods, resulting in 24 free throw attempts for Roxas. JPS big man Jerwin Gaco also fouled out with four minutes to go in regulation.

Another instance that caught the ire of the whole JPS bench was their final shot that could have given them the win. With 19.7 ticks left in the fourth, Fran Yu got the inbound pass and drove hard to the basket, where Jordan Sta. Ana and Lester Reyes met him to deny the potential game-winner. After the buzzer sounded, Espinas and Yu were seen shaking their heads in disbelief.

Also shown in the broadcast was JPS head coach Tony Pardo begging the referees for a foul, pointing the spot on the court where Yu fell after his shot attempt. (JNP)