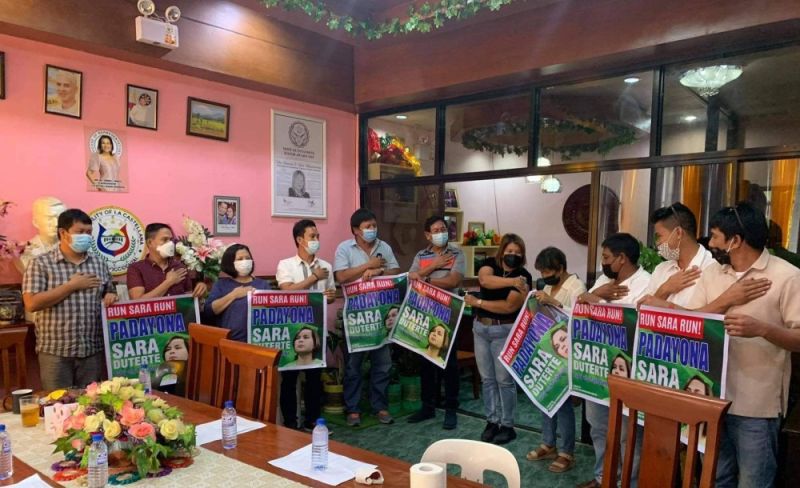 SUPPORT. Two more mayors in Negros Occidental express their support in joining the call for Davao City Mayor Sara Duterte-Carpio to run for president in the May 2022 elections. (Contributed photo)

TWO more mayors in Negros Occidental and their respective Municipal Councils, including barangay captains, have expressed their support for Davao City Mayor Sara Duterte-Carpio as presidential candidate for the May 2022 elections.

La Castellana Mayor Rhumyla Nicor-Mangilimutan said that she and other town officials are supporting Duterte-Carpio if she decides to run for the highest government position.

“For me, women empowerment,” Mangilimutan said, in response to a question on why she will support Duterte-Carpio.

She noted that Duterte-Carpio managed Davao City well, and in terms of governance, she said the Davao City mayor should be emulated by other local government officials.

She said that being a local chief executive, Duterte-Carpio is very much familiar with running the executive branch and having been familiar with the needs of the people at the grassroots level.

Noting that Negros Occidental officials were supporting different presidential candidates in previous elections, Mangilimutan, a member of the United Negros Alliance (UNegA), said she is hoping that the province will only support one candidate in next year's elections.

Arceo also led Hinigaran officials and representatives of various organizations, including sectoral groups, who also assured of their support to Duterte-Carpio's bid for the presidency, should she decide to go for it.

Silay City Mayor Mark Golez was the first mayor of Negros Occidental to openly express his full support to the call for Duterte-Carpio to run for president in the 2022 elections, in another meeting with Señoron's group last week.

Duterte-Carpio had earlier expressed her willingness to run for the country's top position.

Golez and Arceo are both members of Love-Negros, while Mangilimutan is affiliated with United Negros Alliance.

On August 1, Señoron said that members of the LGBTQ community in Bacolod City and Negros Occidental also joined the mounting clamor for Duterte-Carpio to run for president during a meeting with the convenors of ABC-Padayona Inday Sara in Bacolod City.