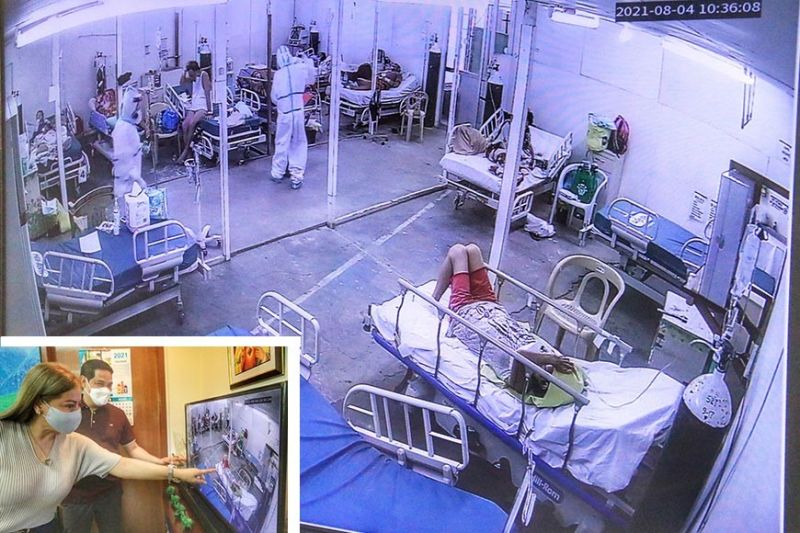 ISOLATION WARD. Cebu City Medical Center administrator Yvonne Cania and CCMC medical director Dr. Anton Oliver Reposar II (inset) show closed-circuit TV footage of the center’s isolation ward at the temporary site of the CCMC at the old Citom building beside the Bureau of Fire Protection 7 building on N. Bacalso Avenue, Cebu City Wednesday, Aug. 4, 2021. Cania said over 30 individuals who tested positive for Covid-19 are currently being treated at the site, and they are in severe or critical condition. The temporary site will be used exclusively for Covid-19 patients once the new CCMC building is able to accept inpatients. (Amper Campaña) 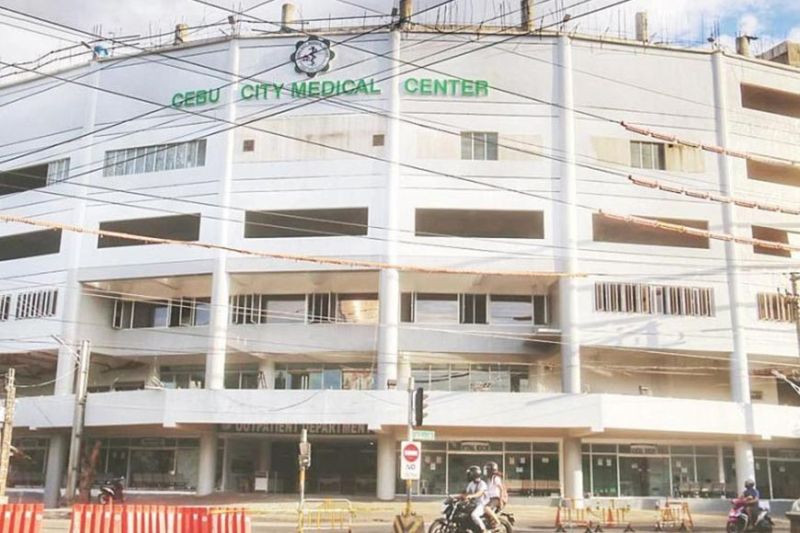 AS CORONAVIRUS infections continued to increase, Cebu City Acting Mayor Michael Rama on Wednesday, Aug. 4, 2021, ordered the completion of the first three levels of the new Cebu City Medical Center (CCMC) in less than a week.

He warned that if the contractor fails to make the first three floors operational by Aug. 9, he will have the contract with the City Government terminated.

“The marching order is have that ground floor, second floor and third floor operational and functional and that will be this coming Monday,” Rama said in a press conference Wednesday.

In the next couple of days, Rama said he will also focus on transferring to a hotel the medical frontliners currently staying at the dormitory beside the Cebu City Quarantine Center (CCQC).

The dormitory, which was a project of the Department of Public Works and Highways (DPWH), would be converted into an isolation facility for Covid-19 patients with mild to moderate symptoms.

In Mandaue City, the Emergency Operations Center (EOC) informed the City Government about the need to hire more contact tracers to cope with the increasing Covid-19 cases and replace the 90 contact tracers hired by the Department of the Interior and Local Government (DILG) whose contract to serve in Mandaue City will end on Aug. 8.

Cebu City recorded 210 new Covid-19 cases on Aug. 3, the highest for the day in Central Visayas, followed by Cebu Province with 205, Lapu-Lapu City with 132, Mandaue City with 105, Negros Oriental with 45, Bohol with 16, and Siquijor with four cases.

The daily positivity rate in the region was high at 17.7 percent as 717 out of 4,049 samples tested yielded positive results.

The DOH 7 said, however, that the deaths did not occur in just one day.

The first three floors of the new building were partially opened in December 2020. These contain the outpatient department, delivery rooms, operating rooms and wards, emergency room and imaging department.

If completed, these can also accommodate 159 beds. The temporary CCMC building can host around 100 Covid-19 patients.

Rama conducted an inspection at the new CCMC building on Aug. 4 and met with the project engineers.

He said that by Aug. 9, the patients currently admitted in the temporary CCMC facility should be transferred to the new building.

Corminal said the Aug. 9 target is feasible because this is consistent with the timeline of the DEPW and the contractors.

Corminal said they are now working on the installment of electricity and water.

EOC deputy implementer Julius Caesar Entise, who is also the head of the contact tracing team, said only 41 contact tracers, who were hired by the City Government, would be left once the contracts of the 90 contact tracers end.

With the rising number of Covid-19 cases, Entise said the remaining contact tracers might be overwhelmed as they are also in charge of the persons under monitoring (PUMs). At present, he said most of the contact tracers finish work at dawn.

He said the City Government had informed him that it will hire some of the contact tracers employed by the DILG.

Entise did not specify how many contact tracers they needed.

“The more contact tracers, the better for us,” said Entise.

At the Mandaue City Hospital, Seno said they had 18 Covid-19 patients and seven other patients as of Aug. 3.

He said they had allocated only 10 beds for Covid-19 patients.

Of the 25 patients, five are in a tent outside the hospital waiting for a vacant bed.