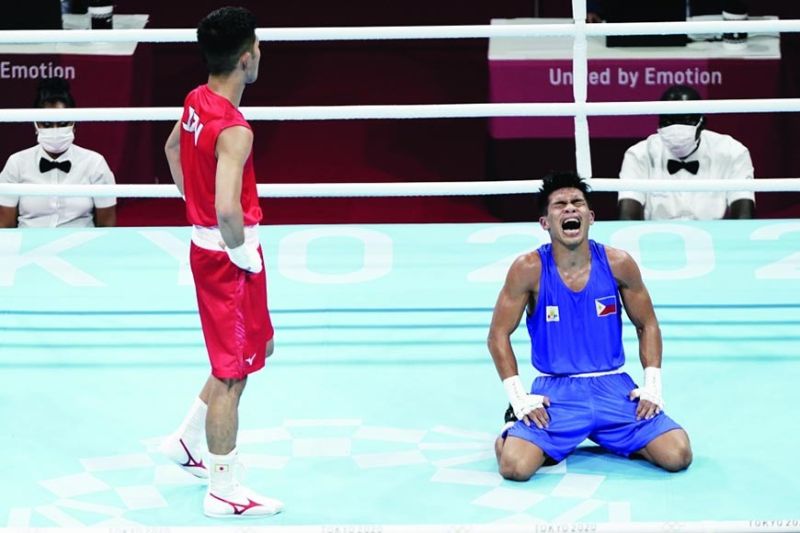 CARLO Paalam is off to the finals, while Eumir Marcial settled for a bronze medal in boxing at the 2020 Tokyo Olympics at the Kokugikan Arena in Tokyo, Japan, Thursday, Aug. 5, 2021.

The 23-year-old Paalam beat Japanese Ryomei Tanaka via a convincing 5-0 decision in the Men’s Flyweight division semifinals, assuring himself of a silver medal.

Paalam was quicker on his feet and was more consistent in landing his punches.

Paalam continues his impressive run in the Olympics and faces Great Britain’s Galal Yafai in the finals on Saturday, Aug. 7.

On the other hand, Marcial lost to Ukranian Oleksandr Khyzhniak via a close 3-2 decision in the Men’s Middleweight division semifinals.

Khyzhniak started out aggressively, while Marcial fought intelligently and picked his punches well. Marcial clinched to disrupt Khazhniak’s barrage. Marcial suffered a gash on the left side of his head after an accidental clash of heads near the end of the first round.

Sensing that the fight could go either way, Khazhniak continued his frenetic pace. It paid off, as he won the third round on all judges’ scorecards, which was the deciding round.

Marcial is the fourth medalist from the Philippines in the 2020 Tokyo Olympics after Hidilyn Diaz bagged the gold in weightlifting and Nesthy Petecio won a silver in boxing.