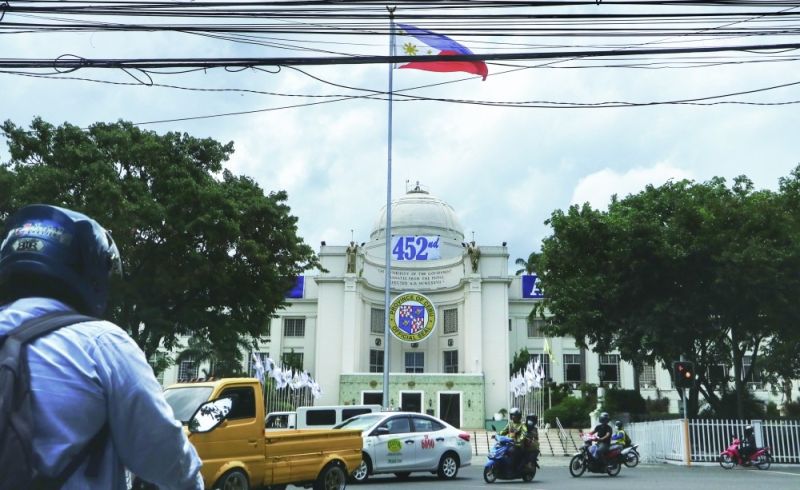 FOUNDING ANNIVERSARY. Amid the declaration of general community quarantine in Cebu Province, the Capitol prepares to commemorate the 452nd Cebu Provincial Charter Day on Aug. 6, 2021 by putting up a huge logo of the Province of Cebu on its facade on Thursday, Aug. 5, 2021. (Amper Campaña)

AS CEBU celebrates its Provincial Charter Day on Aug. 6, 2021, Cebu Gov. Gwendolyn Garcia expressed hope that the number of Covid-19 cases will drop so that the activities they have planned for the Cebuanos will push through.

Garcia said they also expected a simple celebration in 2020 as Cebu was still facing a pandemic.

“It’s like deja vu. Cebu City is under modified enhanced community quarantine (MECQ) so we still can’t celebrate, just like last year. Let’s hope that after Aug. 15, our cases will start to drop,” said Garcia.

Before the pandemic, the province’s founding anniversary would be celebrated for the entire month of August.

“Our activities like the ‘One Cebu’ expo, the ‘Sugbo Negosyo’ and the ‘Agro Fair’ can be rescheduled hopefully on the third or last week of August because we had been celebrating the founding anniversary on a month-long basis,” said Garcia.

It is a special non-working holiday for the entire province including the cities of Cebu, Lapu-Lapu and Mandaue.

This is according to Republic Act No. 8952 in 2000 that was amended by former congressman Pablo Garcia under Republic Act No. 7698, declaring Aug. 6 of each year a special non-working holiday in the province and its highly urbanized and component cities.

One activity to be held on Aug. 6 is the joint flag ceremony expected to be attended by Garcia, Vice Gov. Hilario Davide III, Provincial Board members and the department heads of the Capitol.

The mayors of the cities and towns will also join the activity virtually. (ANV / CCP)