San Simon under state of calamity 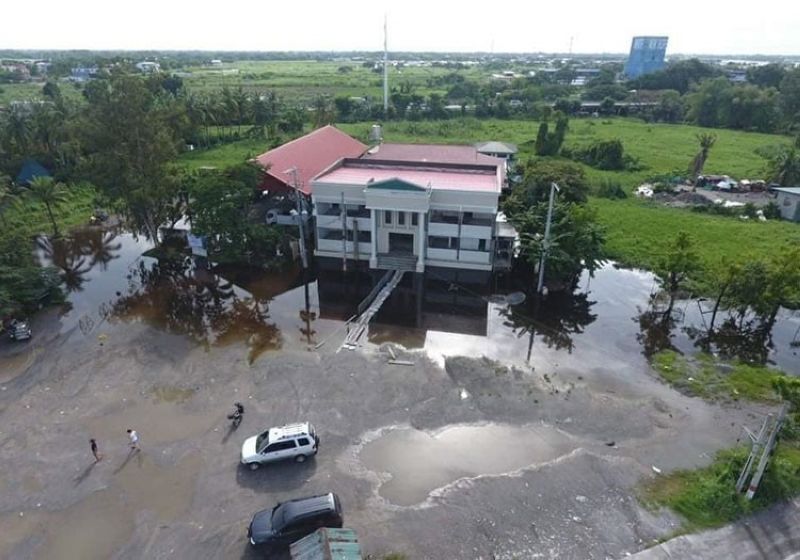 STATE OF CALAMITY. The Municipal town hall of San Simon, Pampanga is submerged in floodwaters, forcing the local government to declare a state of calamity and transfer its services to the government center in Barangay Sto. Nino. (Chris Navarro)

SAN Simon town in Pampanga has been placed under state of calamity following the destructive effects of monsoon rains enhanced by Typhoon "Fabian."

Acting Mayor Leonora Wong said that as of Friday, August 6, portions of all the 14 barangays were experiencing up to three feet of flooding, affecting nearly 3,500 Simonian families.

"By declaring state of calamity, the local government and our barangays can utilize disaster funds to help our kabalens who, until today, are still experiencing flooding," she said.

The local chief executive added that several relief operations have been conducted in different barangays in town to assist flood victims.

Even the municipal hall located along the McArthur Highway in San Simon was not spared from flooding, as its ground floor was submerged in two feet of floodwaters as of August 6.

Most of the employees, including Wong and her staff, had to temporarily move to the Local Government Center in Barangay Sto. Niño to continue performing their duty.

"As of now, the employees left at the Municipal Hall are the ITs because our internet connection here is not yet stable but once telephones and fiber optic connection is installed, they will also move because as of now, the place is not really conducive for working," Wong said.

She also cited the inconvenience of doing business in the municipal hall due to flood and mud, and the limited access as portions of roads from most barangays going to it were flooded by up to four feet.

"It's a good thing that we have buildings in the Local Government Center which can house us temporarily to continue serving Simonians as convenient to them as possible," she said.