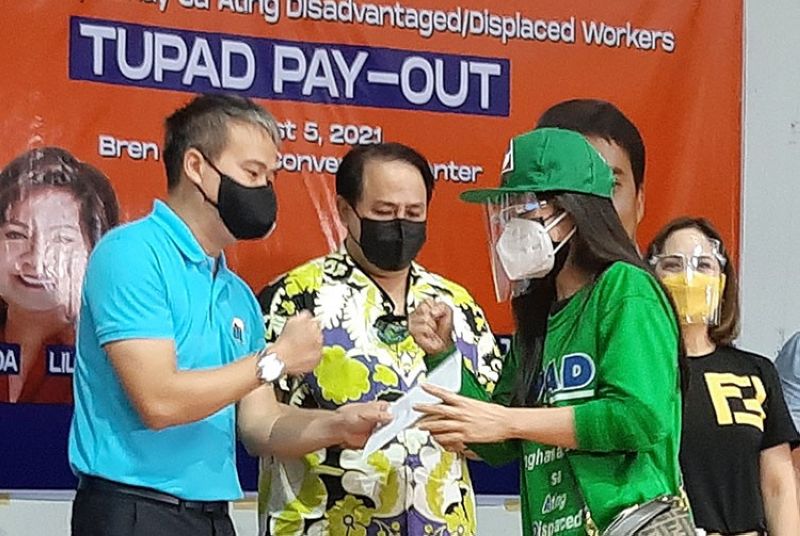 TUPAD PAYOUT. Senator Joel Villanueva and Governor Dennis Pineda lead the salary payout of some 500 Tupad beneficiaries in the province. With them is Board Member Fritzie Dizon. (Princess Clea Arcellaz)

HUNDREDS of displaced and unemployed Kapampangan workers were able to get temporary livelihood through the Department of Labor and Employment's (DOLE) Tulong Panghanapbuhay sa Ating Displaced/Disadvantaged Workers (Tupad) program.

On Thursday, August 5, 500 Kapampangan beneficiaries of the said program received their wages after rendering 10 days of various services to community.

Senator Joel Villanueva, who secured the funding for the program, led the payout ceremony held at the Bren Z. Guiao Convention Center, where every worker received P4,200 each.

"In this time of pandemic, many Filipinos have lost their jobs and livelihood and we wanted to assist and help them provide for their families through this emergency employment program of DOLE," Villanueva said.

He added that the distribution of salaries, which totaled to P2.1 million, is part of the nearly P10-million fund that has been downloaded to the province through the Tupad program.

He said beneficiaries of the program come from different city and municipalities of Pampanga -- 500 from Guagua, 400 from Magalang, 500 from the City of San Fernando, 300 from Sasmuan and from Sasmuan.

"We continue look for ways to help our fellow Filipinos and I consider these kinds of payout program as my way of reporting to the people who gave me this job," he said.

Governor Dennis Pineda expressed gratitude to Villanueva for allocating funds for such program that will benefit Kapampangans.

"Right now, we really need leaders who work to help the people recover from the effects of the pandemic and we are very thankful to Senator Villanueva for assisting our kabalens through the Tupad program," he said.