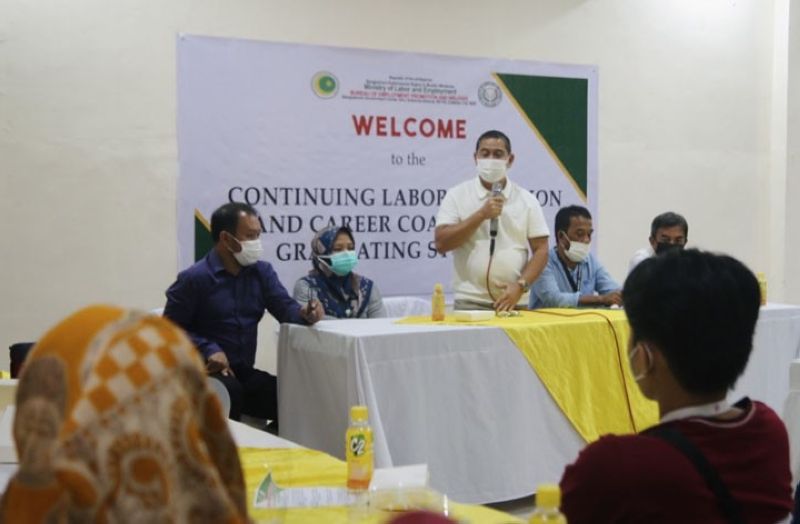 ZAMBOANGA. The Ministry of Labor and Employment in the Bangsamoro Autonomous Region in Muslim Mindanao (Mole-Barmm) releases on Friday some P717,750 funds representing the two months stipends of 145 Government Internship Program (GIP) recipients in Maguindanao. A photo handout shows Mole Minister Romeo Sema (standing) encouraging the recipients of the program to hone their skills. (SunStar Zamboanga)

THE Ministry of Labor and Employment in the Bangsamoro Autonomous Region in Muslim Mindanao (Mole-Barmm) released on Friday, August 6, 2021, some P717,750 funds representing the two months stipends of 145 Government Internship Program (GIP) recipients in Maguindanao.

The GIP is an intervention of Mole-Barmm under its Bureau of Employment Promotion and Welfare aimed to provide opportunities to fresh college graduates to work in the government for three months.

Mole Minister Romeo Sema said the beneficiaries received their salaries for the months of June and July. They are yet to complete their internship for August.

Sema said each monthly stipend was worth P4,950 or equivalent to 75 percent of the minimum wage.

Sema emphasized that the GIP is one of the major programs of Mole to help unemployed college graduates in the region enhance their skills and talents.

Aziza Guiamel, 30, a secondary education graduate from Cotabato State University, said the training she gained during her internship will be of big help to improve her skills and knowledge.

Sema said they are targeting 1,900 beneficiaries across the region for this year, 400 of which are allotted for graduates from Islamic institutions.

He encouraged the GIP beneficiaries to take advantage of their mobile phones while searching for permanent jobs. (SunStar Zamboanga)