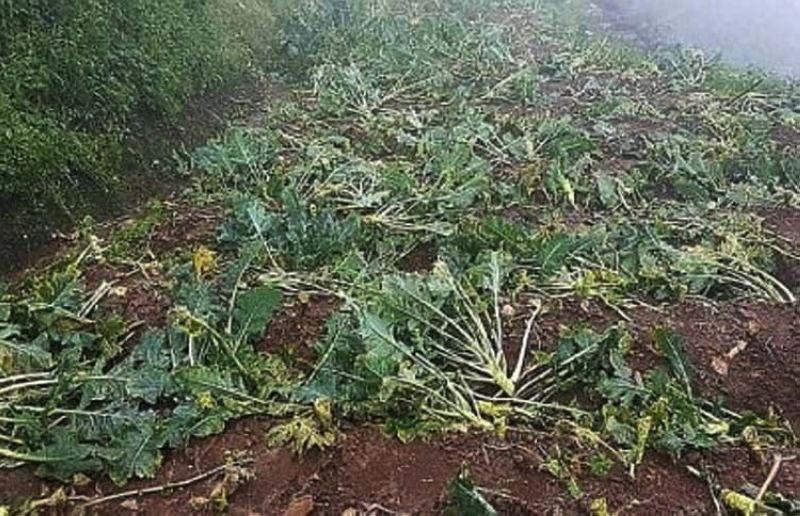 DAMAGED CROPS. The municipality of Kabayan in Benguet has declared a state of calamity after about 85 percent of its agricultural products were damaged by the continuing monsoon rains. Vice Mayor Mircoles Lamses, in a message on Monday evening (Aug. 9, 2021), said estimated damage was at PHP123.7 million. (Photo courtesy of Kabayan Municipal Agriculture Office/PNA)

BAGUIO CITY – The municipality of Kabayan in Benguet province has recorded PHP123,750,000 damages to crops and infrastructure due to monsoon rains prompting the local government to declare a state of calamity.

The municipal council approved Resolution 149-21 entitled " A Resolution declaring the municipality of Kabayan, Benguet Province under State of Calamity" on Aug. 2.

The resolution was transmitted to the Office of Mayor Basilio Louie Daoal Jr. on Aug. 9.

Vice Mayor Mircoles Lamses, in a message on Monday evening (August 9), said the town suffered from the three weeks of continuous downpour that led to the damage of 85 percent of its crops and some farm-to-market roads, making them impassable.

He said 720 farmers have been affected by the calamity.

Data from the municipal agriculture office provided by the vice mayor shows that the town produces an average of 63,896.58 metric tons (MT) of assorted vegetables per year. From the total, cauliflower has the biggest annual production at 8,118 MT and broccoli at 1,746 MT.

"Kabayan is the land of cauliflower. Most of the cauliflower is produced in our municipality," he said.

Lamses said cauliflower as well as broccoli cannot survive when it is overly soaked in water.

The vice mayor said the town also produces other agricultural products like tomatoes, carrots, and other leafy vegetables, which were also affected by the continuous rains.

He said that about 80 percent of the residents rely on agriculture as their source of income.

Lamses said the declaration of a state of calamity is not only to allow them to use a portion of their calamity fund to assist the affected farmers but also to get other agencies and the provincial government to help the town recover from its losses.

"We cannot afford it on our own," he said.

The municipality is highly dependent on Internal Revenue Allotment which this year is estimated at PHP122 million. (PNA)