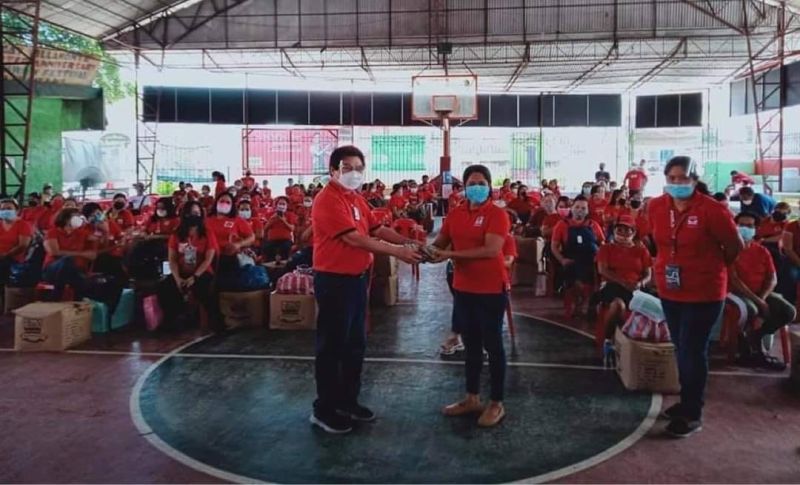 BACOLOD. Mayor Evelio Leonardia and Vice Mayor El Cid Familiaran with Banaag LGBT President Lyndon Tupas and Pacita Tero lead the distribution of 3,000 food packs to the 122 daycare center teachers in Bacolod City at Barangay Villamonte Gym Wednesday, August 11, 2021. The food packs will be distributed to the parents of the daycare center students. This is to ensure that the family members especially the children are getting sufficient nutrients despite the pandemic. Given to the beneficiaries are pork, eggs, vegetables and groceries. (PR)

BACOLOD City garbage hauler IPM-Construction and Development Corp. (IPM-CDC) will make a special trip to collect biodegradable trash like leaves, tree and bush cuttings in various areas of the city.

This was stressed by Horace Yap, consultant of IPM-CDC, Wednesday, August 11, 2021, after a Bacolod resident raised his concern to Sunstar-Bacolod that the city’s garbage hauler allegedly refused to pick up biodegradable trash.

Yap said if the garbage collectors fail to pick up the biodegradable trash like leaves, tree and bush cuttings, household owners can inform the barangay so that the barangay will also inform the IPM-CDC to collect the trash.

He said they will make a special trip every Sunday to collect biodegradable wastes.

The complainant, whose name is being withheld, told Sunstar-Bacolod that the trash pick-up workers intentionally leave the biodegradable trash and only pick it up if the homeowner specifically requests it.

“Our garbage collectors will not pick up the leaves, tree and bush cuttings at any time because we have special trips for these,” Yap said.

He said if there is uncollected trash, household owners should inform the IPM-CDC or their barangay so that they can pick it up.

“Total clean-up is part of the IPMC-CDC’s contract so it’s our obligation to collect all the garbage in the city. Currently, we are also implementing the one-garbage collection at night in the main and secondary roads in Bacolod City,” he added.

Yap noted that they are also conducting “recorida” in various barangays as part of their information campaign.

Yap said there will be no collection of garbage along the main and second roads in the daytime from 6 a.m. to 5 p.m.

"The garbage should be disposed of in the designated areas only from 6 p.m. to 9 p.m., the garbage disposal time," he said.

He added the IPM-CDC trucks will pick up the garbage only from 9:30 p.m. onwards for main and secondary roads.

Neil Marcelino, project supervisor of IPM-CDC, earlier said they acquired additional dump trucks and other equipment from Manila and have a total of 220 garbage collectors to improve their services in the city.

He said they now have a total of 71 units of dump trucks and compactors to collect all the garbage in the 61 barangays.