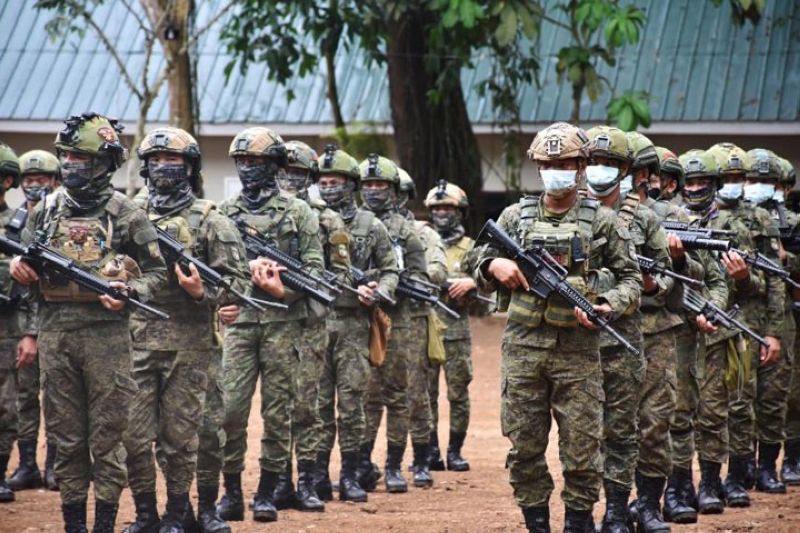 ZAMBOANGA. The Sulu-based 11th Infantry 'Alakdan' Division holds a three-day Alakdan Squad Challenge, the first-ever competition to hone the tactical skills of troops. A photo handout shows the participating troops standing in formation at the culmination of the competition Wednesday, August 11, with troops from the 45th Infantry Battalion emerging as the champion. (SunStar Zamboanga)

THE 11th Infantry “Alakdan” Division announced that the participants from the Army’s 45th Infantry Battalion (IB) emerged as the champion in the three-day first Alakdan Squad Challenge in Sulu.

The competition, which culminated Wednesday, August 11, was initiated by the 11th Division Training School in Tagbak village, Indanan, Sulu.

Major General William Gonzales, 11ID commander, awarded the Alakdan Challenge Perpetual Trophy and individual medals to the competitors from the 45IB as champion during the ceremony Thursday.

The 41IB and 100IB placed second and third, respectively.

Gonzales congratulated all the participants and the training committee for being part of the Alakdan Challenge.

“This is a milestone, and from now on this competition will be an annual tradition. The Alakdan Challenge shall build our confidence, this shall make us believe that our unit's greatest asset is our soldiers. Our excellence, courage and sincerity will be our best weapon against peace spoilers,” Gonzales said.

Lieutenant Colonel Herbet Dilar, 11ID assistant chief of staff for operation, said the squad challenge was a competition among selected squads from six organic infantry battalions of the division.

“We want to push our squads, the smallest fighting unit of the infantry, to its best in terms of organizational cohesion and operational proficiency. Hence, their skills in map reading, land navigation, assembly and disassembly of weapons, obstacle course with endurance firing battle drills and disaster response and rescue operations were tested in this three-day competition,” Dilag said. (SunStar Zamboanga)