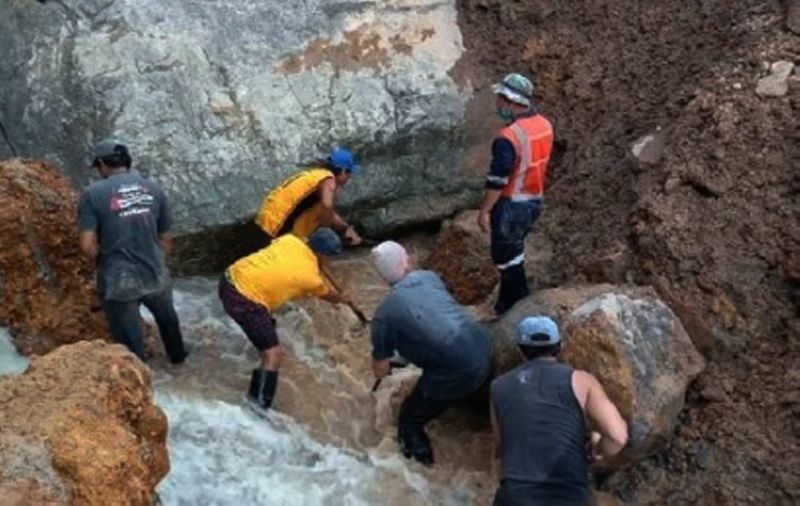 MANUAL DIGGING. Government and volunteer emergency responders manually dig under a boulder where two miners were believed to have taken refuge when a landslide occurred in the area. The Department of Social Welfare and Development delivered about 50 family food packs to aid the rescuers and a tent where they can take refuge in case of rain. (PNA photo by Dionisio Dennis Jr.)

BAGUIO CITY – The Department of Social Welfare and Development (DSWD) distributed on Tuesday food packs for the rescuers still searching for two missing miners in a landslide that happened while they were gold panning at Antamok River in Itogon, Benguet.

DSWD-Cordillera Administrative Region (CAR) Director Arnel Garcia, in a post on its social media account on Tuesday, said they have given a family tent where rescuers can stay for a rest or take cover in case of rain aside from the 50 family food packs for the search, rescue, and retrieval operatives who are scouring Antamok River in Loacan, Itogon to find the two missing persons.

Around a hundred emergency responders are at the site helping find the missing persons.

Earlier, live-in partner Nestor Talangcag, 54, and Morina Simeon Lintal, 57, both residents of Beda, Loacant were reported to have been buried after they sought refuge under a boulder when a landslide occurred while they were doing gold panning activity.

The soil erosion is comparable to the major landslide that occurred in Ucab, Itogon in 2019 that buried almost a hundred people in a mining community.

Nestor’s son, Homer, 17, who was with them at that time, was able to run far enough to evade the cascading mud. He was rushed to a hospital but was immediately discharged.

The rescuers resumed rescue and retrieval operations on Wednesday morning with only one backhoe.

In an interview with Nestor’s brother, Dante Tomi, on Tuesday evening, he asked for help from government agencies and others who can extend assistance so that they can feed and provide water to the emergency responders who are looking for his missing relatives.

He also asked for an additional backhoe to supplement the one sent by the Loacan Itogon Pocket Miner's Association (LIPMA) immediately following the incident on Tuesday.

The provincial government of Benguet on Wednesday has sent the province-owned backhoe but was unable to reach the riverside. (PNA)