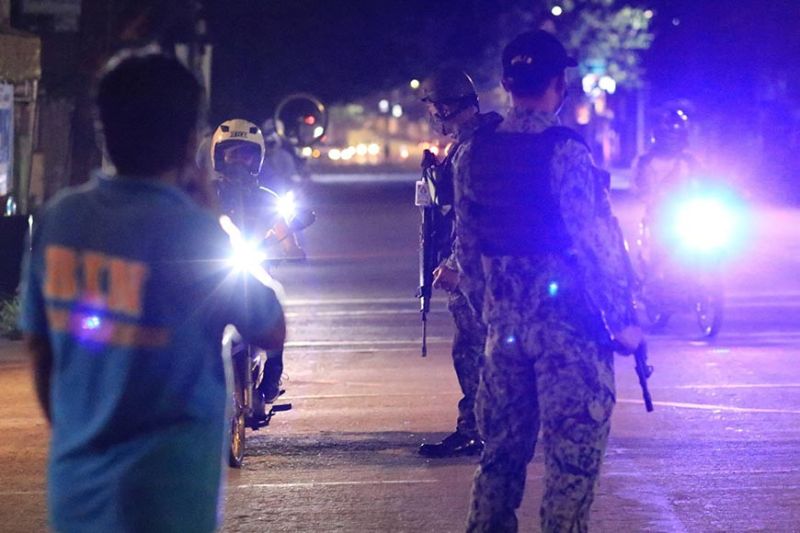 SAFETY PROTOCOL. Checkpoints are back at the borders of Guadalupe, one of the biggest barangays in Cebu City, which is under modified enhanced community quaratine (MECQ). Police check every passing vehicle and pedestrian for their compliance with health and safety protocols as outlined under Oplan Puyo, a directive from acting Mayor Michael Rama to let everyone stay home unless there is a compelling reason to leave the house. (AMPER CAMPAÑA)

ANOTHER day, another harsh milestone, as the coronavirus disease 2019 (Covid-19) continues to pick its victims in Cebu.

After breaching 500 three days ago, the death toll from Covid-19 this month in the whole Cebu has now hit 700 for just the first 18 days of August, according to the latest Department of Health (DOH) 7 case bulletin.

The DOH 7 daily case bulletins come with the note that not all deaths reported on a certain day occurred on that day, but some may have occurred more than a week ago but were only recently reported following validation of the outcome of the confirmed cases.

That means of the 700 deaths reported in the first two weeks of August, not all Covid victims died this month.

Eugenia Mercedes Cañal of the Regional Epidemiology and Surveillance Unit (Resu), said from Aug. 1 to 16, the DOH 7 logged a total of 456 confirmed Covid-19-related deaths in the entire Cebu. These were mortalities confirmed as Covid-related by their death certificates.

But the case fatality rate this year continues to be less than half that of 2020 because of the sheer number of new cases reported this year as a combination of new and more transmissible coronavirus variants and lockdown fatigue conspired to make residents more vulnerable to the virus.

In Cebu City Wednesday, where the DOH recorded 417 new Covid-19 cases for the day, Acting Mayor Michael Rama witnessed the soft opening of the first three floors of the new Cebu City Medical Center (CCMC) building where up to 200 non-Covid patients may be transferred to make room for more Covid-19 patients at the old building that houses the Cebu City Transportation Office, where both Covid and non-Covid patients are currently being treated by CCMC personnel.

Also on Aug. 18, several mayors in Cebu Province sought the help of Cebu Gov. Gwendolyn Garcia to have the Department of Education (DepEd) allow them to use classrooms as isolation facilities for Covid-19 patients.

DepEd 7 Director Salustiano Jimenez said he had received requests from the towns of Minglanilla and Consolacion and the City of Naga.

The three are among the 11 towns and cities Governor Garcia placed under modified enhanced community quarantine (MECQ) with heightened restrictions from Aug. 11 to 31 to curb the rise in Covid-19 cases.

Salustiano said the highly urbanized cities of Mandaue and Lapu-Lapu also submitted requests to the DepEd for the use of classrooms as isolation centers.

Meanwhile, pediatric Covid-19 cases made up about 11 percent of the region’s total cases since the start of this year, according to the Resu.

As of this writing, Central Visayas logged 15,500 active Covid-19 cases.

“We have a spike of cases in the past three to four weeks and there were also a spike in the number of critical cases and severe cases. It has been attributed to increase in transmissibility and because of the increase in transmissibility, there are numbers of families affected and there are more persons with comorbidities and senior citizens affected,” DOH 7 Director Jaime Bernadas said.

Bernadas said the past four weeks had been a “nightmare” for the region’s hospital system which ran short of their medical response even after additional medical personnel were dispatched by the DOH.

“There was really a problem during the past three weeks, but lately, last week, we have increased significantly the number of rooms and the number of emergency rooms that were opened and made available,” Bernadas said.

The DOH 7 has deployed 139 healthcare personnel to various private hospitals in the region.

In Cebu City, data from the Emergency Operations Center (EOC) shows 25 percent of mortalities recorded in August were from the city’s mountain barangays.

Councilor Joel Garganera, EOC deputy chief implementer said of the 156 deaths recorded by the EOC as of Aug. 18, 30 were residents of northern mountain barangays while nine were from southern mountain villages.

While deaths reported from mountain villages in the south district, came from Babag (1), Buhisan (3), Buot (1), Kalunasan (3), and Sapangdaku (1).

Garganera said a cluster clinic in Barangay Pit-os has been established to cater to residents from mountain villages.

“Early detection would lead us to early intervention,” said Garganera.