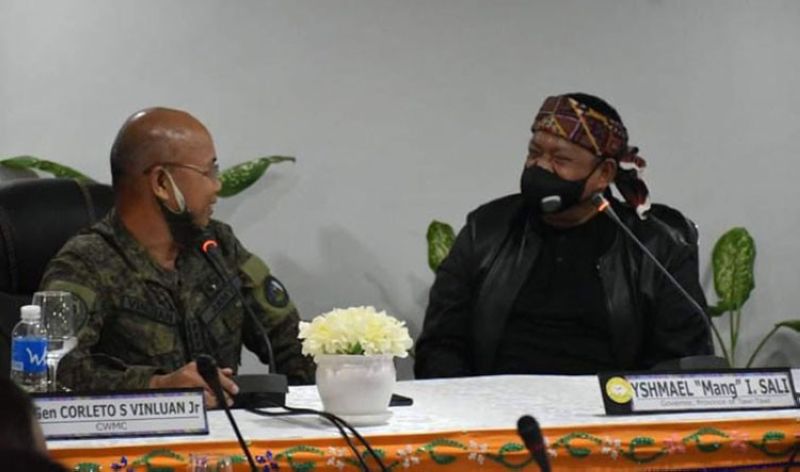 ZAMBOANGA. Lieutenant General Corleto Vinluan Jr., commander of the Western Mindanao Command (Westmincom), commends the troops of the Joint Task Force (JTF)-Tawi-Tawi for their accomplishments in the anti-terrorism campaign during his farewell visit Wednesday, August 18. A photo handout shows Vinluan, who is retiring next week, share light moments with Tawi-Tawi Governor Yshmael Sali as he also pays an exit visit to the governor. (SunStar Zamboanga)

LIEUTENANT General Corleto Vinluan Jr., commander of the Western Mindanao Command (Westmincom), has commended the troops of the Joint Task Force (JTF)-Tawi-Tawi for their accomplishments in the anti-terrorism campaign.

Vinluan made the commendation during his talk to the troops when he paid a farewell visit Wednesday, August 18, to the JTF-Tawi-Tawi and 2nd Marine Brigade a week prior to his retirement from the military service.

The most notable accomplishments of the JTF-Tawi-Tawi was the rescue of Malaysian hostages following a clash that resulted in the death of Sulu-based Abu Sayyaf leader Majan Sahidjuan alias Apo Mike in March this year in Kalupag Island, Languyan, Tawi-Tawi.

"Let us sustain the momentum, remain steadfast in accomplishing our mission, and continue to establish a good relationship with our partners, stakeholders, and the communities so as to win their popular support to all our endeavors, for it is better to win peace without a single bloodshed," Vinluan told the troops.

Vinluan expressed his gratitude to Sali for his unwavering support to the Westmincom's thrust.

Likewise, Sali thanked Vinluan for all the assistance extended by the command to the province of Tawi-Tawi particularly in ensuring the safety and security of the people.

Also present during the short meeting were the local chief executives of all the municipalities of Tawi-Tawi.

They also expressed their appreciation to Vinluan, who is set to retire next week. (SunStar Zamboanga)