Lighting strike causes blackout in Cebu, other parts of Visayas 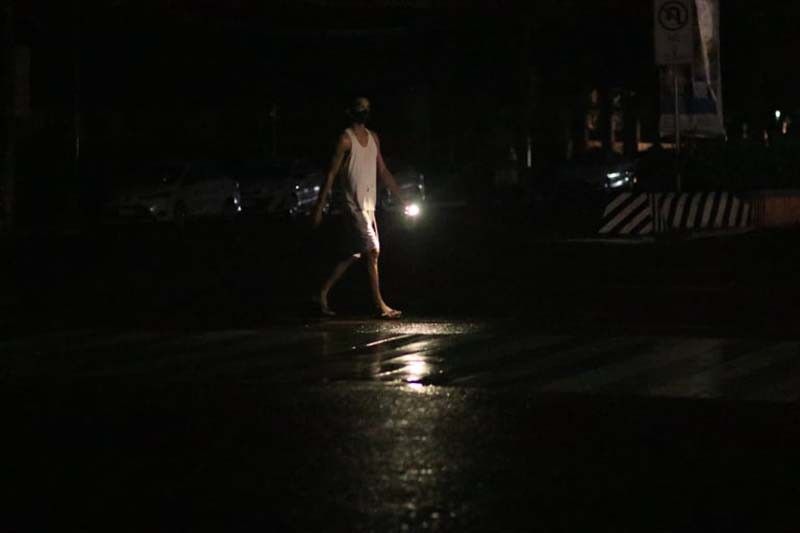 A walk in the dark. A man uses his cellular phone’s flashlight to light his way along Osmeña Blvd. as Cebu City and most of Cebu were plunged into darkness by a power outage late Friday night, Aug. 20, 2021. The power interruption lasted until dawn of Saturday in some areas. All power in Cebu was finally restored by 4:30 a.m. Energy Secretary Alfonso Cusi has urged the Energy Regulatory Commission to investigate the incident. Officials of the Electric Power Industry Management Bureau and the Department of Energy also met on Saturday to discuss what happened. (AMPER CAMPAÑA)

SOME parts of Cebu and other areas in the Visayas suffered a blackout that started Friday night, Aug. 20, 2021, and lasted until early Saturday morning, Aug. 21.

Officials of the National Grid Corp. of the Philippines (NGC) Visayas blamed a lightning strike for the power interruption, which also affected parts of Leyte, Samar and Bohol.

“When our Colon-Cebu and Colon-Quiot transmission lines were hit by lightning, it triggered a partial blackout which not only affected our lines in Cebu, but also in other areas in the Visayas,” Martinez said in a mix of English and Cebuano.

Parts of southern Cebu that get their electricity from Toledo City’s power plants were not affected.

Martinez said the restoration of power lines began at 12:52 a.m. on Saturday.

Officials of the Electric Power Industry Management Bureau and the Department of Energy also met on Saturday to discuss what happened.

The power outage “slightly” inconvenienced coronavirus disease 2019 (Covid-19) patients in Cebu City, especially those who are staying in public schools that serve as barangay isolation centers, where all the electric fans went off.

Garganera said his office and the Emergency Operations Center have yet to receive any report of incidents at hospitals as a result of the blackout.

“We should have contingency plans if a similar incident will happen in the distant future,” he said. “We need to ensure a steady power supply in our hospitals because this could spell a life and death situation for our patients.”

Dr. Jeffrey Ibones, officer-in-charge of the City Health Department (CHD), assured that there was no recorded spoilage of Covid-19 vaccines in the city.

Ibones inspected vaccine storage in malls and in the CHD office on Saturday morning.

He said backup generators were immediately turned on after the power went out.

“We have a generator and so do the malls. So the vaccines were not affected,” he said in a mix of Cebuano and English.

Ibones said around 2,000 doses of various vaccine brands were left in cold storage at the CHD.

“All hospitals and cold rooms (vaccine facilities) are required (to have) backup generators (which are checked regularly). No reports for now,” he said in a text message.

In Lapu-Lapu City, officials in charge of the City’s vaccination rollout said their vaccine stocks were also not affected.

James Sayson, deputy officer of the City’s vaccination operations center, said the freezer where their vaccines are stored can provide refrigeration of up to 12 hours even without power.

However, he admitted the incident served as a “wake-up call” that they need to secure a backup generator in case of another blackout.