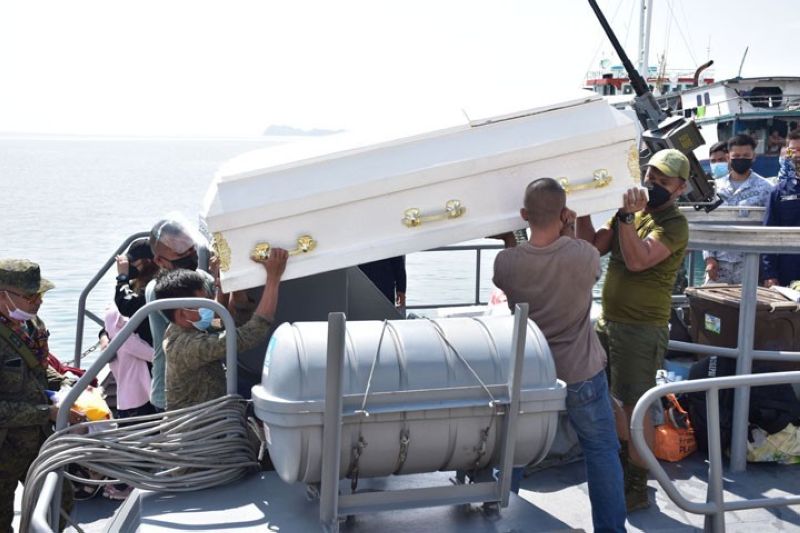 GUN SALUTE. The 11th Infantry Division renders a 21-gun salute on Friday, August 20, to Corporal Gulam Hajirol Ismael, one of the C-130 plane crash on July 4 in Patikul, Sulu. A photo hand shows the remains of Ismael who was transported aboard a Multi-Purpose Attack Craft for burial rites in his native place in Kaumpang village in the island town of Tapul, Sulu after his remains were properly identified. (SunStar Zamboanga)

THE 11th Infantry Division has rendered a 21-gun salute to Corporal Gulam Hajirol Ismael, one of the C-130 plane crash on July 4, after his remains were properly identified and immediately fetched to his native place in Kaumpang village in the island town of Tapul, Sulu.

The 11ID immediately facilitated the transport of the remains of Ismael to his native place after his remains were properly identified by authorities in Zamboanga City on Thursday, August 19.

“We utilized military watercrafts to fast-tract the transport that on morning of August 20, 2021, he arrived in Tapul where our troops rendered a 21-gun salute,” said Major General William Gonzales, 11ID and Joint Task Force-Sulu commander.

Gonzales noted that Ismael's hometown is 19.8 nautical miles from Jolo, the capital town of Sulu.

The remains of Ismael were transported aboard a Multi-Purpose Attack Craft and Special Forces' speedboat.

Meanwhile, Asiri, Ismael's father, expressed that he now feels relieved that his son has been laid to rest.

(We are thankful that Gulam is home. We are also thankful that our son was given this honor. We have received so much financial support, but it is only now that I felt the government’s appreciation of my son.)

Ismael was only 30 years old when he perished in the July 4 C-130 plane crash at Sitio Amman in Bangkal village, Patikul, Sulu.

He has been serving the country as a soldier for about eight years in Cagayan de Oro under the 4th Infantry Division until he was reassigned to 11ID.

“As an organization, we will get past this tragic incident. But these people who signed up to dedicate their lives to the Filipino people shall always be remembered. They shall keep us motivated and committed to accomplishing our mission,” Gonzales said. (SunStar Zamboanga)